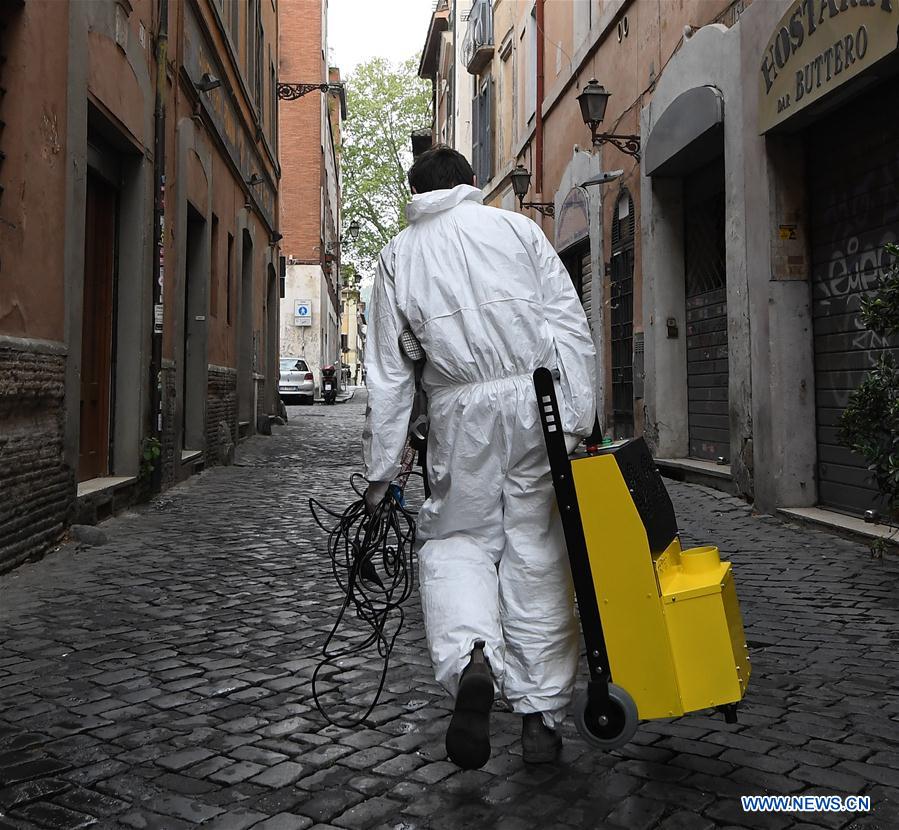 ROME: The COVID-19 has claimed another 602 lives in locked-down Italy over the past 24 hours, bringing the total number of infections, fatalities and recoveries to 162,488 since the pandemic began here in late February, the country's Civil Protection Department said Tuesday.

The rest, or 70 percent of all positive cases, are quarantined at home, Borrelli said.

The death toll on Tuesday was 602, bringing the total to 21,067 since the pandemic first broke out in northern Italy on Feb. 21.

He added that there were 1,695 additional recoveries compared to Monday, bringing the total to 37,130.

Borrelli also said that the Civil Protection Department can now count on 10,598 volunteers and he thanked European Parliament President David Sassoli, who is Italian, "for the beautiful words he spoke today about our volunteers, defining them as the pulsating heart of the best of Italy and a resource that we cannot do without."

The civil protection chief said Italians have so far donated over 122 million euros (133 million U.S. dollars) to the coronavirus emergency fund, and that his department has so far spent 26 million euros of the donated money to purchase individual protection gear and ventilators.

With regards to migrants reaching Italy's shores, Borrelli said his department is working to identify solutions and "the possibility of quarantining incoming migrants on ships, or in areas or facilities on land. So we are assessing the measures to be fielded."

No specific vessel or location for quarantining migrants has been decided on yet, Borrelli said.

Also present at the press conference was Dr. Massimo Antonelli, who directs the Emergencies and Reanimation Department at Rome's Policlino Gemelli Hospital.

He told reporters that a comparative study of total intensive care unit cases over the course of the past four weeks in the northern Lombardy region, where the pandemic first broke out, and the central Lazio region where Rome is located, showed that in spite of vastly different numbers - 3,862 and 424 patients, respectively -- both regions showed identical survival rates of 65 percent.

"This means that the severity of the illness, above and beyond the raw numbers, stays the same," Antonelli said.

"The conclusions to be drawn could be that, first, the (containment) measures have worked and are working to reduce the impact on our health care facilities and secondly, that, while the patients (who reach the ICU) are severely compromised, the effectiveness of the intensive care units is the same in both regions, giving us a 65 percent survival rate, which is impressive given the severity of the illness," he explained.

In the northern city of Parma, Mayor Federico Pizzarotti granted an emergency waiver to the national lockdown rules banning all public ceremonies including weddings and funerals in order to marry two doctors who are battling on the COVID-19 front line.

The husband, 48, is a doctor in the COVID-19 ward of Parma's Maggiore Hospital while the wife, 35, is a doctor at a long-term rehabilitation clinic for recovering COVID-19 patients in the town of Albinea near the city of Reggio Emilia. Both Parma and Reggio Emilia are in the northern Emilia-Romagna region.

Pizzarotti officiated at the civil ceremony in City Hall, with the few people present all wearing surgical masks.

"Today is a special day during a special period, because a wedding that takes places at this time is a bit like a wartime wedding," Pizzarotti told TG Sanita, a weekly newscast by the National Federation of Orders of Surgeons and Dentists (FNOMCeO, in its Italian acronym).

"At a time when our civilization and our society are at a standstill, celebrating the marriage of two doctors who are saving lives on the front line is a sign to their family and also to society at large, so that we can look with hope to the future that awaits us," said the mayor.

FNOMCeO, which is keeping a running tally of doctors who lost their lives in the battle against the virus, also announced the death of a family doctor on Tuesday, bringing the total fatalities among their ranks to 116 since the emergency began.

Also on Tuesday, the Interior Ministry said that police carried out checks on a total of 252,148 individuals who were circulating during the "Pasquetta" or "Little Easter" holiday on Monday.

Under normal circumstances, Italians mark the Easter long weekend with outings, trips, and big meals with families and friends.

"A total of 16,545 people were fined, 88 were cited for making false statements and another 29 were cited for being outside their homes while being positive to the virus," the ministry said in a statement.

Under the terms of the government's nationwide lockdown that went into effect on March 10 and expires on May 3, people are forbidden from leaving their homes except to fulfil basic needs such as getting groceries, walking their dogs, or for provable health emergencies.

People who tested positive with the virus and are under home quarantine are absolutely forbidden from going outside. Violators are punishable with hefty fines, and the violation gets noted on their criminal records.