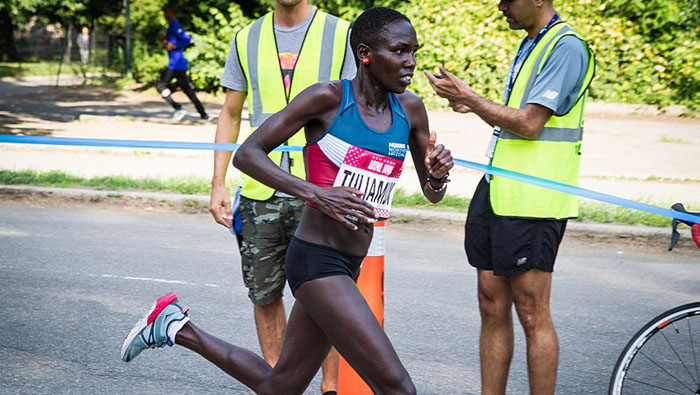 Nairobi: Marathoner Aliphine Tuliamuk hopes the world will move past the COVID-19 pandemic and see sports flourish as before.

Kenyan-turned-American Tuliamuk, who will be leading the U.S. marathon team to the Tokyo Olympics, said the difficulties she endured in Kenya's Rift Valley, where she was a budding athlete over 20 years ago, has made her resilient and she believes she will overcome the challenges brought about by the pandemic.

"I think what I really want is for the world to heal so that all of us can pursue, and hopefully achieve, any of our individual and collective goals in life," Tuliamuk said on Friday.

At the turn of the millennium, the future 2020 U.S. Olympic Marathon Trials champion was just another promising young runner in the Rift Valley province of her native Kenya.

Only 11 years old, she was selected to compete in the Rift Valley's regional meeting in the 10,000m after outracing older girls in the arduous event.

On their way to the competition, her coach - Geoffrey Ptormos, a distant relative of Tuliamuk's - arranged for Tegla Loroupe to come to meet the team.

The local Kapenguria legend was training for the 2000 Olympic Games as the favorite for the marathon and the 5,000m, and by then had captured two New York City Marathon titles, three World Championship half marathon titles, and was the world record holder in the marathon twice over, with her best effort of 2:20:43 standing until September 2001.

But Tuliamuk didn't know any of that quite yet. Instead, it was Loroupe who was quite taken with the young runner's abilities.

"The athletes I had beaten in the 10,000 were way older than me, so Tegla was very impressed by my performances," Tuliamuk remembers. "She ended up giving me a pair of shoes and she became my hero instantly."

Tuliamuk didn't race in the brand-new flats right away ("I wasn't used to wearing shoes and racing, I thought they would hold me back.") but she treasured the gift, saving the new shoes for special occasions.

"It meant the world to me," she says. "I was barefoot at the time, so to get this really beautiful, clean pair of shoes from her was awesome."

Now with the hope of running in the Olympics for her adopted country, Tuliamuk can dare to live her dream despite the spread of COVID-19, which has put a pause on proceedings in the world over.

"I am grateful thus far, my immediate family, friends, and I are healthy and safe, the consequences of COVID-19 have definitely impacted my plans - both for my career and my life - and that has been difficult to come to terms with," Tuliamuk said.

But she still hopes to win her first Olympic medal.

"It's scary not knowing what the future holds. As an athlete, my goal is to bring home a medal for my country. But I think what I really want is for the world to heal so that all of us can pursue, and hopefully achieve, any of our individual and collective goals in life. That hope, that new dream, is what will keep me running," she said.