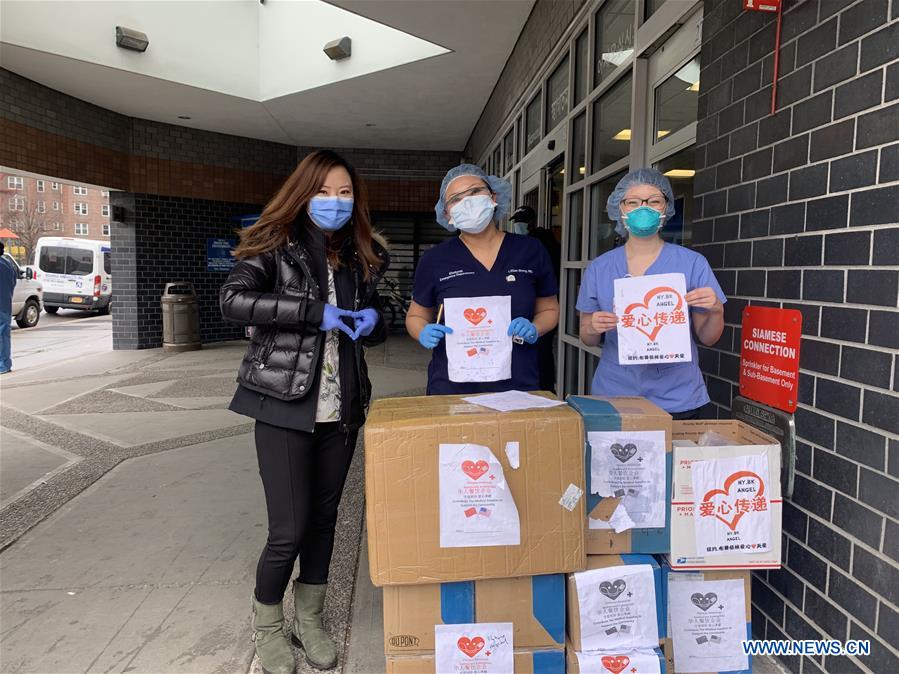 Among those donators, 115 restaurant owners from the Chinese American community across the United States have contributed over 72,000 U.S. dollars and enabled the donation of 20,000 surgical masks, 300 N95 masks, 3,550 protective coveralls and 500 pairs of gloves to multiple hospitals in New York City and one hospital in the state of New Jersey last week, said Vickie Wang on Sunday, who has direct knowledge of the matter.

Most of the donators are restaurant owners from Florida, New York, New Jersey and other states, according to records from Wang, who operates a restaurant service-related company in the Chinatown area of Lower Manhattan.

Wang told Xinhua that the donation team bought most of the protective gears from a local supplier and more than ten hospitals have received donations including Elmhurst Hospital, Mount Sinai Hospital, NYU Langone Health, Brooklyn Methodist Hospital, Staten Island University Hospital and others.

The donations were presented to relevant hospitals by volunteers, led by Michelle Zhou, according to Wang.

The volunteers from the Chinese community took great risks and sent the donations directly to the hospitals.

In the next step, protective masks would be donated to a local police precinct and nearby residents, said Zhu on Sunday.

Zhu told Xinhua the sales person from his company would drop several masks at the doorstep of each individual who is in contact with him and showed interests in getting the masks.

In February and March, Zhongke Health International has already handed out hundreds of masks to local residents, according to Zhu.

Jiang Mingtao, a ginseng grower in Marathon County in Wisconsin state, also has received around 1,000 surgical masks and 400 N95 masks from his friends and clients in China and donated them to local hospitals and police officers in last few days.

Jiang told Xinhua on Sunday that he has ordered 5,000 surgical masks and 1,000 N95 masks for donation and the first batch of masks should arrive on Monday.

Marathon Ginseng International Inc. launched by Jiang in 2010 has sent over 1,500 units of ginseng fibers for tea to clients across the United States for free, added Jiang.

Chinese Americans in Milwaukee of Wisconsin aim to raise 50,000 U.S. dollars to help fight COVID-19, according to Jiang.

Moreover, the operations of multiple Chinese companies are also working to donate medical supplies in large quantities or mulling such plans.

As much as 100,000 surgical masks and gloves are planned to be donated to medical institutions, post offices and sanitary operators and other people from essential services, Xu Chen, chairman of China General Chamber of Commerce-U.S.A. (CGCC) and president and CEO of Bank of China USA.

Xu said, the above-mentioned medical supplies as the first batch of a donation plan would be handed out in the name of a fund under CGCC.

Still, the shipment of medical supplies has been slow and met unexpected delays after landing at airports in the United States, according to Catherine Feng, senior vice president for corporate communication and business relation with New York Branch of Bank of China.

Feng added that "we're making efforts to secure delivery of the medical supplies."

One local subsidiary of another Chinese financial service company is considering the donation of 100,000 masks with various options, a source with the company told Xinhua.

"If the main society doesn't step in quick enough, the donations by individuals like us, only could meet requirement for a very short time," said Wang, citing the difficulties to find medical supplies.

"Virus is a virus, and it does not pertain to any race, nationality nor ethnicity. We want to help our society to fight against this virus and everyone should do anything possible to help the society to go through this difficult time," stressed Wang.

However, Wang said she is pleased to know that a commercial aircraft carrying a large number of medical supplies from China has landed at New York on Sunday.

The supply of coveralls, masks, ventilators and other protective gears has come under severe shortage especially in some parts of the United States with large numbers of COVID-19 cases.

As of 3 p.m. Eastern Time on Monday (1900 GMT), there were more than 153,000 confirmed cases in the United States, with 2,828 deaths, according to the latest tally from Johns Hopkins University's Center for Systems Science and Engineering (CSSE).