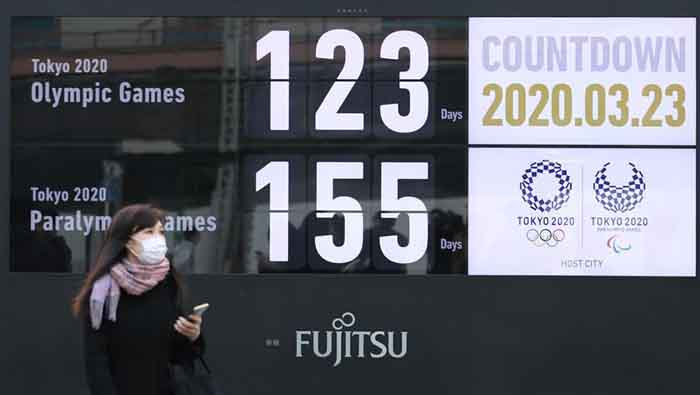 Tokyo: The Japanese government is set to tell the International Olympic Committee (IOC) that if it decides to postpone the 2020 Tokyo Olympics amid the COVID-19 pandemic, it will accept the IOC's decision, sources familiar with the matter said Monday.

The latest development comes after Japanese Prime Minister Shinzo Abe on Monday hinted for the first time at the possibility the forthcoming summer games could be postponed if they could not be held in their "complete form" amid the pandemic.

"If it is difficult to hold the games in such a way, we have to decide to postpone it, giving top priority to the health of the athletes," the Japanese leader told a parliamentary session on the matter.

Abe had previously said that Japan was still pushing ahead to host the games in their "complete form," meaning as per the current schedule and in front of spectators.

But the latest remarks from the Japanese leader now suggest the plausibility that the summer games could be postponed due to global spread of the pneumonia-causing virus and the danger this poses to athletes and spectators.

"I think many of them are in areas where they cannot train properly as the new coronavirus is spreading in the world," Abe said, adding "This applies not just to our country, it is important that all participating nations can participate in good condition."

Abe's remarks were made a day after the IOC said that it is exploring a number of scenarios amid the pandemic, including the possibility of postponing the games.

On Sunday, the IOC finally admitted there was a possibility the games may not proceed as initially planned owing to the outbreak of the virus.

It said the possibility existed of the event being pushed back and that final discussions on the matter would be held "within the next four weeks."

These scenarios relate to modifying existing operational plans for the games to go ahead on July 24, 2020, and also for changes to the start date of the games, the IOC said in a statement.

Abe, for his part, said the IOC will ultimately make the final decision on the matter.

He added, however, that neither the IOC or Japan has discussed the idea of cancelling the quadrennial games, nor is such a scenario tabled to be discussed.

"Although the IOC will make a final decision on the matter, we are of the same view that cancellation is not an option," Abe said, adding that he would work closely with the IOC and the Tokyo metropolitan government on the issue.

Tokyo Olympic organizing committee president Yoshiro Mori told a press conference he supports the IOC's decision to use the next four weeks to traverse a number of scenarios regarding the holding of the Olympics from July 24.

Mori also said that it will be down to local organizers to decide whether to continue with the first leg in Japan of the torch relay, slated to begin in Fukushima on Thursday, as the situation surrounding the Olympics and COVID-19 was an extremely fluid one.

Mori said that he had been informed by IOC President Thomas Bach that in terms of the domestic leg of the torch relay, Japanese organizers have the authority to decide how to proceed.

He also said that Abe was now "reluctant" to attend the torch relay's starting ceremony as the Japanese government has been ardently requesting people not to hold or attend large events or gatherings in order to prevent the spread of the virus.

Olympic minister Seiko Hashimoto on Monday told reporters that the Japanese leg of the Olympic torch relay would continue as scheduled.

Tokyo Gov. Yuriko Koike, meanwhile, told a press briefing on the matter that she was open to discussing various options regarding the Olympics being held with relevant authorities including the IOC over the next four weeks, during which a number of scenarios would be considered, with Koike doubling-down on her belief that the Games should not be cancelled.

"The IOC clearly stated that cancellation will not happen, and I am glad to share that view. There are lots of issues, but I would like to discuss possible scenarios over the next four weeks with the IOC and the organizing committee," Koike said.

"The Tokyo Games now have another goal to defeat the novel coronavirus," said Koike.

As the continued spread of the COVID-19 has organizations, athletes and the public concerned about the global quadrennial sporting spectacle, national Olympic committees in Brazil, Norway and the Netherlands have called for postponements, while Canada and Australia have both said they will not send teams to the games if they are held this year due to concerns over the global COVID-19 pandemic.