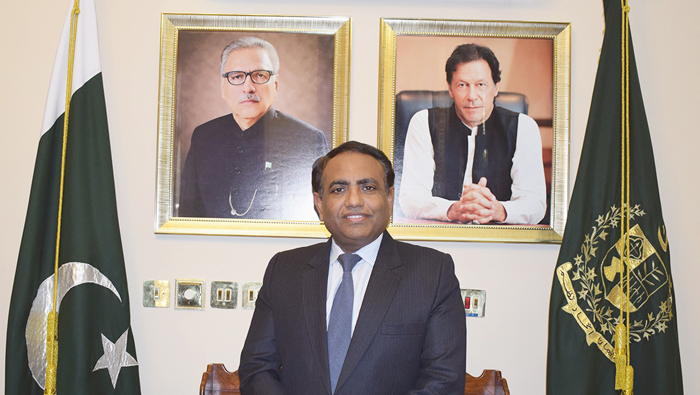 Muscat: At the outset let me offer my deepest condolences on the sad demise of late His Majesty Sultan Qaboos bin Said bin Taimour, whose sagacious leadership over the past five decades has transformed the Sultanate into a beacon of peace and a modern society, where 250,000 Pakistanis residing across the Sultanate are the direct beneficiaries of late His Majesty’s generous hospitality and benevolence of Omani Society.
Late His Majesty Sultan Qaboos bin Said bin Taimour was a great visionary leader, nation builder, peace maker and statesman for excellence. He was a person who lived every moment of his life with total dedication and determination for the improvement of Oman and its people. His role as a peacemaker in the region and even in the world, received global acclaim.
Late His Majesty Sultan Qaboos bin Said bin Taimour played an extremely important role in promoting brotherly and friendly ties between Pakistan and Oman. His visit to Pakistan in 2001, laid the solid foundation of this highly cooperative relationship. Pakistan deeply values his contribution for promotion of bilateral cooperation in various fields.
His policies and programmes have deep impact on regional and international issues. Oman’s neutral and balanced Foreign Policy was a vision of late Sultan, who benevolently ruled the Sultanate of Oman for 50 years.
On behalf of the Government and brotherly people of Pakistan, and as well as on my own personal behalf, I wish to extend felicitations to His Majesty Sultan Haitham Bin Tarik, the Government and the brotherly people of the Sultanate of Oman on accession of His Majesty Sultan Haitham Bin Tarik to the throne in the aftermath of sad demise of late His Majesty Sultan Qaboos bin Said bin Taimour, who was a true friend and brother of Pakistan.
I avail myself of this opportunity to express my best wishes for His Majesty Sultan Haitham Bin Tarik’s everlasting health and happiness and for the continued progress, stability and prosperity of brotherly country.
On the auspicious occasion of the National Day of the Islamic Republic of Pakistan, I wish to express my best wishes and felicitations to every member of the quarter million Pakistani residents in the Sultanate of Oman. March 23, is a glorious day which commemorates the ‘Lahore Resolution of 1940’ that eventually led to the creation of Pakistan.
Pakistan and Oman enjoy historical bonds of affinity and kinship. The relations are strongly pegged on common faith, culture and values. I am confident that these would continue to grow further after His Majesty Sultan Haitham Bin Tarik’s accession to the throne, in times ahead.
Besides, while keeping the esteemed community abreast, it gives me immense pleasure to state that when the year 2018 ended with unprecedented high level interactions from Pakistan, including Chiefs of Pakistan, Chairman Senate of Pakistan, Minister for Religious Affairs & Inter-Faith Harmony, Chairman of the Joint Chiefs of Staff, etc, the preceding year 2019 will also be remembered as a watershed year in Pak-Oman relations witnessing an unprecedented trajectory of exchanges between the Parliamentary, Political, Civil Society and Defense leadership of our brotherly nations.
The year 2019 added substance and impetus with Pakistan’s Foreign Minister H.E. Shah Mahmood Qureshi’s visit (January 29-31, 2019) dovetailed by the Chairman of the Joint Chiefs of Staff Committee General Hayat (February 2-6, 2019) and visits to Pakistan by Chairman Majlis-e-Shura (September 3-6, 2019) and Chief of Staff of the Sultan’s Armed Forces (October 14-17, 2019).
The Honourable Foreign Minister and his Omani counterpart HE Yusuf Alawi for the first time co-chaired ‘Joint Commission’, held ‘Strategic Consultations’ and witnessed ceremony to sign Memorandum of Understanding (MoU) for Labour and Literature, and another with the Defence institutions during the visit of Chairman of the Joint Chiefs of Staff Committee.
The Royal Oman Navy participated in multinational exercises ‘AMAN’ hosted by Pakistan Navy. DG of Maritime Security Agency visited Muscat during February 24-27, 2019, and a representative of Omani Armed Forces witnessed ‘Pakistan Day’ Military Parade on March 23rd.
Let me also share the current year also started with the visit of Minister for Religious Affairs of Oman to Pakistan and signing of MoU in the field of Maritimes Affairs & Exchange of Information between the Sultanate of Oman and the Islamic Republic of Pakistan.
I express my gratitude to late His Majesty Sultan Qaboos bin Said bin Taimour for his gracious love and hospitality for the 250,000 Pakistanis who benefit from the blessed Renaissance. I thank the Government of Oman for its cooperation as well as all Omanis for their infinite and unconditional love which demonstrates the true measure of our 5000 years old bond. May long live Pak-Oman friendship.