US equities rebound amid hopes for stimulus 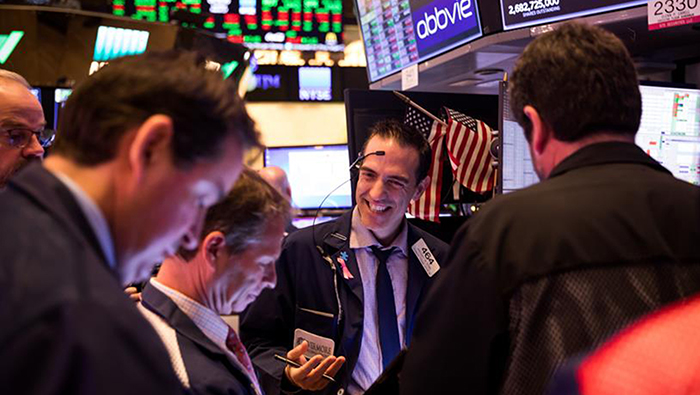 New York: US stocks rebounded on Tuesday, following a historic drop in the previous session, amid hopes for further stimulus measures to counter the coronavirus impact.
The Dow Jones Industrial Average finished up 1,048.86 points, or 5.20 per cent, to 21,237.38. The S&P 500 increased 143.06 points, or 6.00 per cent, to 2,529.19. The Nasdaq Composite Index rose 430.19 points, or 6.23 per cent, to 7,334.78.
All the 11 primary S&P 500 sectors ended higher, with utilities up 13.11 per cent, outpacing the rest.
The Trump administration on Tuesday expressed its intent to offer cash payments for working Americans as part of an economic stimulus package amid coronavirus fallout.
"We're looking at sending checks to Americans immediately," U.S. Treasury Secretary Steven Mnuchin said at a White House press briefing.
Earlier in the day, Bloomberg reported that Mnuchin is negotiating with lawmakers on an 850-billion-dollar stimulus plan to deal with the COVID-19 outbreak, citing people familiar with the matter.
US President Donald Trump said on Monday the US economy "maybe" heading toward a recession and that the COVID-19 outbreak could last for months.
The Federal Reserve on Sunday cut its benchmark interest rate by a full percentage point to near zero and pledged to boost its bond holdings by at least 700 billion U.S. dollars.
Tuesday's market movement followed Wall Street's worst session in more than three decades.
The 30-stock index and the S&P 500 on Monday shed 12.9 per cent and 12 per cent, respectively, marking their worst day since the Black Monday crash of 1987. The Nasdaq Composite had its biggest one-day plunge ever, tumbling 12.3 per cent.
Trading was halted for 15 minutes shortly after Monday's opening bell as steep sell-off triggered a circuit breaker. It was the third time that the circuit breaker, or trading halt, had been tipped since last week.
The number of COVID-19 cases in the United States had topped 5,000 by 12 noon local time Tuesday (1600 GMT), according to the Center for Systems Science and Engineering at Johns Hopkins University.
On the data front, advance estimates of US retail sales dropped 0.5 per cent last month, indicating signs of early damage from the coronavirus outbreak, according to a report from the Commerce Department on Tuesday. Economists polled by Reuters had forecast retail sales climbing 0.2 per cent in February.