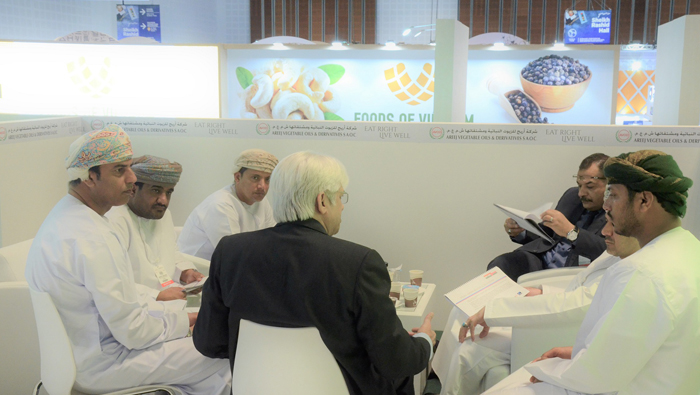 Muscat: The Sultanate’s pavilion at the ongoing annual food and hospitality exhibition – Gulfood 2019 in Dubai is attracting an outstanding turnout of investors, producers, business owners and suppliers. They were interested in getting acquainted with the Omani products and exploring the available investment opportunities in the Sultanate.
The Sultanate’s participation is represented by the Public Establishment for Industrial Estates (Madayn), which is taking part in the exhibition held at Dubai World Trade Centre in the United Arab Emirates for the seventh consecutive year.
Investing in Al Mazunah
Said Al Balushi, acting director general of Al Mazunah Free Zone, stated that the exhibition offers a great opportunity to promote the investment opportunities offered by Madayn industrial cities including those available at Al Mazunah Free Zone.
He emphasised that the free zone is strategically located on the border of the Sultanate and Yemen, which makes it the Gulf gateway for transit trade to Yemen and Eastern Africa.
“The free zone is particularly significant as an economic attraction between the Omani ports and markets on the one hand, and the Yemeni and Eastern Africa markets on the other hand,” Al Balushi pointed out.
He also noted that since Madayn has got a new expansion in the free zone of a total area of approximately 11 million sqm, Gulfood expo represents a great platform to highlight the incentives and advantages of investing in Al Mazunah Free Zone.
General incentives are offered to the investors in the free zone, which include customs’ exemptions, 100 per cent foreign ownership, no minimum capital requirements, and Omanisation rate stands at 10 per cent. Other incentives include easy access of individuals and investors to the free zone without entry visas being required for Yemenis, facilitation of employing Yemeni workforce without entry visa being required, and facilitation for senior Yemeni corporate officers and investors to obtain work visas; among other incentives of importance to the investors.
Al Balushi informed that the number of the operating projects in the free zone has touched 197 by the end of November 2018, and 46 new investment applications are currently under review and study. Madayn is currently working on a number of projects in Al Mazunah, which include phase one of developing the free zone (second package) in addition to phase two, transmitting electricity to the leased companies (cables and transformers), and the broadband project.
It is worth mentioning that a number of Omani companies representing the food industry are taking part in Gulfood this year under the umbrella of Madayn, which include Areej Vegetable Oils and Derivatives, Dhofar Poultry Company, Oman Foodstuff Factory, Omani Vegetable Oils and Derivatives, Sweets of Oman Company, Modern Dairy Factory, National Natural Honey Company, Salalah Mills Company, and Salalah Macaroni Company.