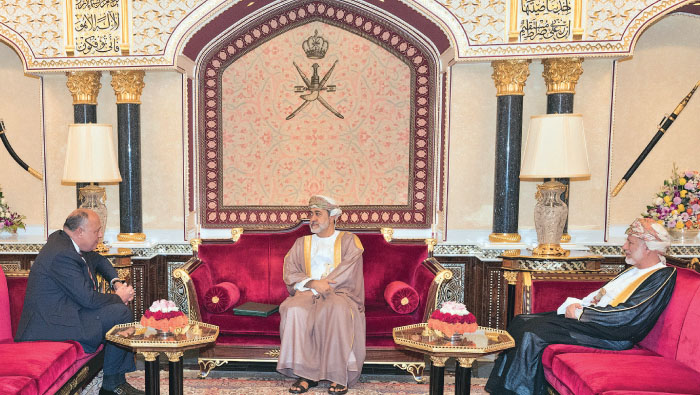 Muscat: His Majesty Sultan Haitham bin Tarik received a written message from President Abdel Fattah el-Sisi of the Arab Republic of Egypt related to the bilateral relations between the two brotherly courtiers and matters of common interest.
The message was handed over to His Majesty the Sultan by Sameh Shoukry, Foreign Minister of the Arab Republic of Egypt when His Majesty gave an audience to him at Al Alam Palace on Wednesday.
During the audience, the guest conveyed greetings of President el-Sisi to His Majesty the Sultan, along with his best wishes of good health and happiness to His Majesty, and the Omani people further progress.
His Majesty asked the Egyptian Foreign Minister to convey his greetings and best wishes of good health and happiness to President el-Sisi, and the brotherly Egyptian people further progress and growth.
The audience reviewed aspects of the existing cooperation between the two sides in various spheres within the context of the existing fraternal relations between the two brotherly countries and peoples.
The audience was attended by Yousef bin Alawi bin Abdullah, Minister Responsible for Foreign Affairs, Mohammed Ahmed Fahmi Ghoneim, appointed-Ambassador of the Arab Republic of Egypt to the Sultanate and the delegation accompanying the guest.