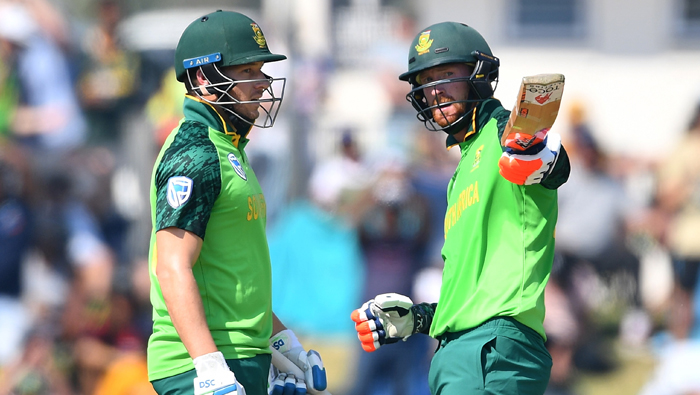 Dharamsala: South Africa ran through a formidable Australian side at home to register their first international series win after almost a year. Can they carry that form against the second-ranked ODI outfit in the three-match series?

India and South Africa have had contrasting fortunes in their most recent ODI series. While South Africa swept Australia aside in the three-match ODI series at home, India were beaten by the same margin in their three ODIs in New Zealand.

The hosts will continue to miss the services of their vice-captain Rohit Sharma, who remains on the sidelines with a calf injury, which he picked up during the T20I series in New Zealand. That means, there will be an additional responsibility of skipper Virat Kohli, the top-ranked batsman in MRF Tyres ICC ODI Rankings, who went through a rare lean patch in New Zealand. While KL Rahul and Shreyas Iyer have solidified their place in the XI with their remarkable consistency, the series presents another opportunity for Rishabh Pant and Manish Pandey to keep themselves in the mix.

Prithvi Shaw is likely to be persisted with at the top, but it won't come as a major surprise if Shubman Gill gets an opportunity at the top of the order, taking into account his returns on the India A tour of New Zealand in January-February. Hardik Pandya's return lends stability, while the fast bowling duties will be led by Jasprit Bumrah and Bhuvneshwar Kumar, who makes a comeback after nearly three months.

South Africa meanwhile, would be immensely pleased with the contributions of Janneman Malan, Heinrich Klaasen and Jon Jon Smuts in the home triumph against Australia. But they will also want the experienced duo of skipper Quinton de Kock and Faf du Plessis to perform well.

Kagiso Rabada's absence means that the visitors look thin on experience in the bowling department, but the impressive returns of Lungi Ngidi and Anrich Nortje against Australia will instil confidence in the visiting side.

The two teams last met in the round-robin fixture at the ICC Men's Cricket World Cup 2019 in Southampton. South Africa's innings never really got going as Jasprit Bumrah and Yuzvendra Chahal ran through half their side, before some useful lower-order contributions from Chris Morris (42), Andile Phehlukwayo (34) and Kagiso Rabada (31*) helped them finish at 227/9. India's chase was anchored by Rohit Sharma's well-compiled 122* as they took the game by six wickets with 15 balls to spare.

When the two teams last met in India, centuries from de Kock, du Plessis and AB de Villiers propelled South Africa to their joint second-highest ODI total of 438/4, which they successfully defended by 214 runs to take the series with three games to two.

Mark Boucher, South Africa head coach: "We have just beaten a very good team now. We needed confidence and it will certainly give us a lot of confidence. India is going to be a tough test. Lot of guys haven’t played a lot of cricket in India. What’s impressive is guys have responded to the messages we have sent out to them on batting and bowling perspective."

There are slight chances of rain through the day which might lead to a delayed start and even frequent interruptions thereafter. That, the dew factor and the history of the venue, which has seen teams batting second win three of the four games, presents a strong case for both captains to win the toss and field first.