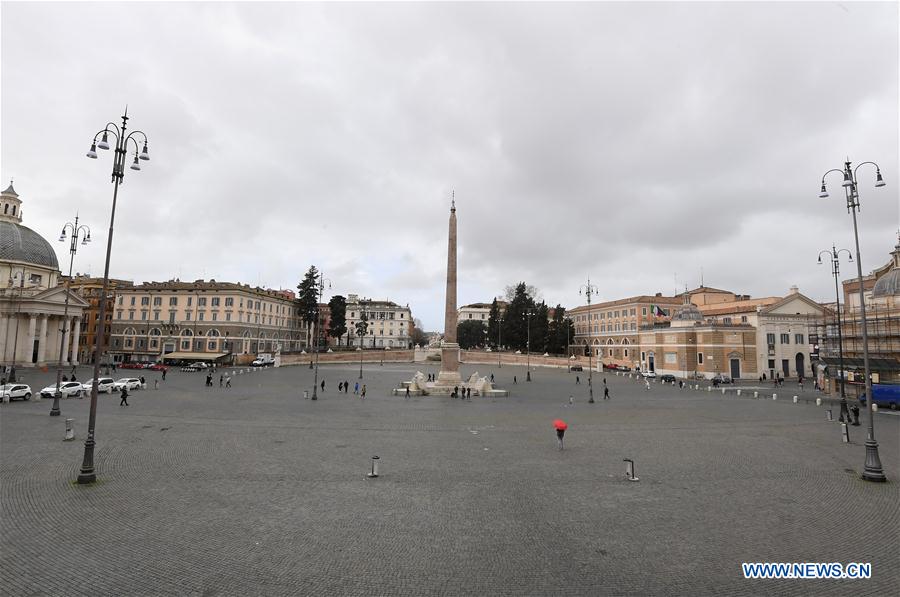 Rome: A total of 3,916 people were tested positive for the coronavirus in Italy since the epidemic first broke out here 15 days ago, the Civil Protection Department said Friday.

The figure did not include recoveries or fatalities, whose numbers were provided separately by Civil Protection Department chief Angelo Borrelli.

In addition, 197 people have died and 523 have recovered, Borrelli told reporters at a televised press conference.

This was up from 3,296 cases, 414 recoveries and 148 deaths announced in an official tally on Thursday evening.

"The recoveries make up 11.28 percent and the deceased make up 4.25 percent (of the total)," said Borrelli, who also serves as Extraordinary Commissioner for the Coronavirus Emergency.

"The 49 people who died today ranged from 62 to 95 years of age, and all had other illnesses," Borrelli continued.

Borrelli also said he was "comforted" by praise Friday from the leader of the World Health Organization (WHO), which is the health agency of the United Nations (UN).

"In difficult times, leadership & commitment are key. The Italian government has adopted extraordinary measures to contain COVID-19 & reduce its social & economic impact. I thank President (Sergio) Mattarella for his appeal to the nation," WHO Director-General Tedros Adhanom Ghebreyesus wrote on Twitter on Friday, referring to a speech to the nation that Mattarella delivered on Thursday.

"Italy is responding strongly. WHO stands with you," Tedros tweeted.

Also at Friday's press conference was National Institute of Health (ISS) President Silvio Brusaferro, who said that "80 percent of the deceased suffered from two or more chronic illnesses, such as heart conditions and diabetes."

"The average age of the deceased is 81 years, and 28 percent of them are women," Brusaferro continued.

He added that some 250 doctors and other medical staff have either tested positive or are under observation because they have been in close contact with infected patients.

The virus was first reported among Italians in the northern Lombardy region on Feb. 21, with no apparent links to China or any other parts of the world with ongoing coronavirus outbreaks. It has since spread to all of Italy's 20 regions.

Also on Friday, organisers of the Formula E electric car racing championship announced in a statement that "according to the provisions set out in the ministerial decree concerning measures to counteract and contain the spread of COVID-19 in the country -- which includes sporting events with large crowds and spectators in close proximity -- it will no longer be possible to stage the Rome E-Prix on April 4, 2020."

"Formula E ... will work closely with championship partners and stakeholders in order to assess and review alternative options to postpone the Rome E-Prix to a later date once restrictions have been lifted," the statement said.

In related news, coronavirus cases have emerged in the two micro-states lying within Italian borders: the landlocked country of San Marino in north-central Italy, and the Vatican City in Rome, which draws many tourists from around the world because it houses such artistic treasures as the Sistine Chapel and St. Peter's Cathedral.

In San Marino, the virus has killed one person so far, according to Health Authority Director Gabriele Rinaldi.

The health official told RTV San Marino broadcaster in a televised press conference on Friday that "as of today we have 23 cases, with 17 patients hospitalised in San Marino, four of them in intensive care" and the rest in isolation at home.

Rinaldi also denied rumours circulating on social media that San Marino might shut down its borders, adding that anyone spreading this fake news may be subject to prosecution.

Vatican Press Office Director Matteo Bruni told reporters on Friday morning that the Vatican's healthcare services have been temporarily shut down to disinfect outpatient facilities after a patient tested positive for the COVID-19 coronavirus on Thursday.

"The Directorate of Health and Hygiene is informing the competent Italian authorities and, in the meantime, the planned health protocols have been initiated," Bruni said, adding that the Vatican is considering ways to avoid spreading the COVID-19.

Earlier this week, the Italian government shut down schools and universities across the country through March 15.

On Thursday, the Italian cabinet announced it is allocating 7.5 billion euros (almost 8.5 billion U.S. dollars) to the coronavirus emergency.