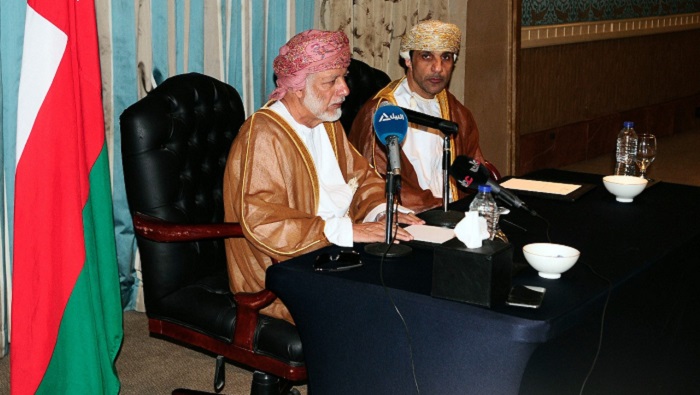 Cairo: Yousef bin Alawi bin Abdullah, Minister Responsible for Foreign Affairs, said that His Majesty Sultan Haitham Bin Tarik has reaffirmed his determination to pursue the legacy of the late His Majesty Sultan Qaboos Bin Said Bin Taimour. Omani foreign policy is permanent and does not change upon the change of leaderships, said Alawi, noting that the Sultanate does not sever relations with any country even if that country severs its relations, “We are not hurt by those who disagree with us”, he said.

Alawi made the statement during his meeting here today with a cluster of Egyptian editors-in-chief and media personnel after the conclusion of the Arab Foreign Ministers Council’s 153rd session.

The meeting was attended by Sheikh Khalifa bin Ali al-Harthy, Under-Secretary of the Ministry of Foreign Affairs for Diplomatic Affairs, Nasr bin Hamoud al-Abri, Media Attache at the Sultanate’s Embassy here, and members of the Omani diplomatic mission.

Alawi pointed out that the Sultanate, through its presidency of the current AL Council’s session, will exert its utmost diplomatic efforts towards resolving all Arab crises.

He explained that relations between the Sultanate and Egypt are fraternal and amicable. He added that the two countries have identical views and that Egypt is an important focal state, not only in its Arabic milieu, but also in the global domain. He described Egypt as a “sturdy nation” that proved its hallmark to the whole world.

Alawi wished that 2020 will be “a year of divine breakthrough” for uniting the Arab household and devising new mechanisms for joint Arab action progressively, not retro-progressively.

He added that the forthcoming Arab summit, due to be hosted by Algeria, was scheduled be held in mid-2020, and that Algeria is keen to convene it, but the summit has been postponed in view of the spread of coronavirus.

Alawi emphasized that summit will reaffirm Arab solidarity and that factors point to that conclusion, even if there are disputes.

Speaking about prospects of the return of Syria—whose seat in the Arab League has been suspended since 2011, Alawi said that, since then, many visions have been expressed by many Arab countries supporting the view that Syria should attend the next Arab summit in Algeria, but this has not been discussed openly. The outcome of consultations will appear in the months to come.

Commenting about the decision of Arab foreign ministers to support Egypt and Sudan in the (Ethiopian) Renaissance Dam, Alawi stressed that “the decision referred to fundamental historical rights”. He said that the whole world supports Egypt in its stand. “We fully understand Egypt’s position because the country is passing through a delicate stage and that it will not let go of its River Nile water’s life-bound rights and principles,” he said.

He added that Egypt has its own circumstances, and so do Sudan and Ethiopia, but there should be no competition or split between Egypt and Ethiopia in Renaissance Dam talks.

Alawi said that Egypt Foreign Minister Sameh Shoukri, who met him on the sidelines of Arab Foreign Ministers meetings, explained to him the Egyptian stance during Renaissance Dam talks.

Asked about the GCC crisis, Alawi said that there is no rift, as such, with Qatar, but merely an intra-familial dispute. He added that the Emir of Kuwait has and is still exerting efforts to help resolve the crisis, and that “from time to time” improvement has been achieved.