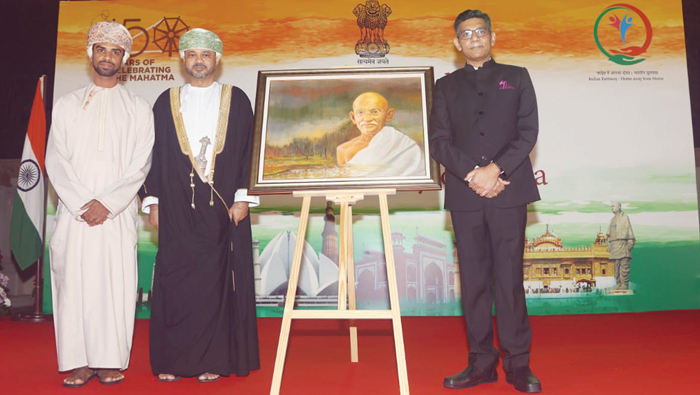 Muscat: Omani artist Saeed Al Ruwaidhi presented Indian Ambassador Munu Mahawar a portrait of Mahatma Gandhi at the Indian embassy’s 71st Republic Day celebrations, which were organised on 26 February.
The portrait of Gandhi, who is often hailed in India as the Father of the Nation, where he is widely called the Mahatma (great soul), was given as a gift in the presence of Badr Al Busaidi, the Secretary General of the Ministry of Foreign Affairs, who was the chief guest at the event. “Ambassador Munu Mahawar spoke about the deep rooted India-Oman relationship and extended his warm greetings to His Majesty Sultan Haitham Bin Tarik for the continued peace, progress and prosperity of Oman,” said a statement from the embassy. “A painting of Mahatma Gandhi by renowned Omani artist Saeed Al Ruwaidhi was also unveiled.
“The reception was also attended by Majlis Al Dawla and Majlis Al Shura members, senior officials from the government and the Sultan’s Armed Forces, ambassadors, diplomats and prominent members of the Omani and Indian communities,” added the statement.
The reception was held on the premises of the Embassy of India. The official event started with the national anthems of Oman and India. After that, the ambassador of India to the Sultanate of Oman, gave a brief speech and paid tribute to the late His Majesty Sultan Qaboos bin Said bin Taimour. He also stated that India could be a reliable partner in Oman’s journey towards becoming a developed, prosperous and technologically advanced nation.
The ambassador also spoke about the importance of Republic Day, especially the constitution of India and highlighted India’s achievements. The formal event ended with a colourful dance performance showcasing the cultural diversity of India.