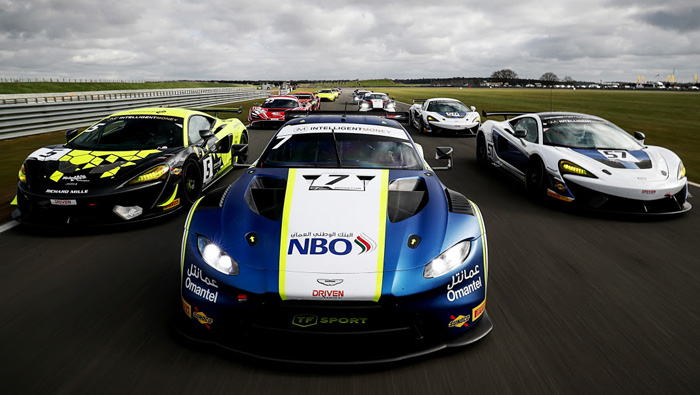 Oman Racing’s Al Harthy, who makes his return to British GT this year for the first time since 2015, put together a very rewarding day at a cold and overcast Snetterton 300 Circuit with team-mate Jonny Adam to end session one fifth fastest and session two atop the timesheets.

Overall for the day, a best time of 1m50.030 seconds (97.13mph) from the afternoon run in the No.7 Aston Martin meant the Oman Racing entry – engineered by British squad TF Sport – concluded the Media Day second quickest, a mere 0.1 seconds shy of the fastest of all.

Al Harthy, who is once again supported this season by the Oman Ministry of Sports Affairs, National Bank of Oman, Omantel and Barr Al Jissah, says he is delighted with the start he has made to 2020 and cannot wait for the opening rounds of the championship at Oulton Park five weeks from now.

“It’s great to have been back at Snetterton after so long, my first running here since 2015 – there’s even a new dual carriageway to the track which wasn’t here when I last raced in British GT!”, said the Omani sportsman, “I’m really happy with our performance overall and it’s great to be back in the car after the winter break.

“We’re obviously still working on a few things with set-ups, and we have a test programme ahead before the first round next month, but this is just the start we wanted. Being fastest in the afternoon was a great feeling, and to end the day just a tenth of a second away from P1 overall is good going.”

Although having been used to racing exclusively on the wider circuits of Europe for the past four years, during which he won two Pro-Am titles in Blancpain Endurance Cup [now GT World Challenge Europe Endurance Cup], Al Harthy took no time at all to readapt to the Snetterton layout.

In the first 70-minute session, the No.7 Aston Martin was fifth fastest overall as well as in Pro-Am with a best lap time of 1m50.804 seconds (96.45mph) to get the official test off to a very strong and competitive start.

During the afternoon run, a full eight 10ths of a second was sliced off the previous best and the Oman Racing duo topped the timing screens a full 0.3 seconds clear of the McLaren 720S of Shaun Balfe and Rob Bell with the lap of 1m50.030 seconds.

While pre-season testing will now continue, the next official outing for the Intelligent Money British GT Championship will be the first two races of the 2020 season at Oulton Park International Circuit in Cheshire on Bank Holiday Monday, 13th April.