Seamers clamp down on India after Kiwi tail wags 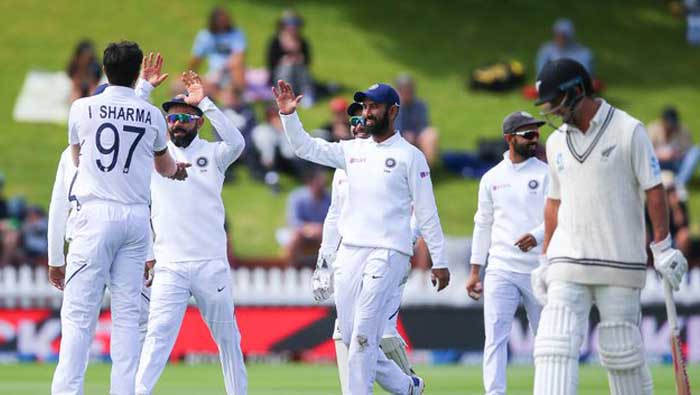 Wellington: New Zealand’s tail garnered quick, useful runs down the order to frustrate India, before the hosts kept Kohli and team under the lid with stifling, short-pitched channels on day three of the first Test in Wellington.
By stumps, a gritty stand between Ajinkya Rahane (25*) and Hanuma Vihari (15*) had reduced New Zealand's lead to 39, with India ending the day at 144/4. Trent Boult was the pick of the bowlers, having accounted for three of the four Indian wickets.
The day began in India’s favour, with BJ Watling falling first ball to Jasprit Bumrah, edging a delivery that lifted more than expected. Four overs later, Tim Southee’s intended flick off Ishant flew to Mohammed Shami at long leg, making it seem that the Indian quicks would be able to close out the innings soon.
Then, Colin de Grandhomme and Kyle Jamieson put on a frustrating stand, garnering useful runs to push the lead past 100. Debutant Jamieson, in particular, did not hesitate in going for his strokes, even as de Grandhomme assumed the role of the accumulator. Off only his eighth ball in Test cricket, Jamieson thwacked a clean six off a Shami bouncer, and later, helped himself to two huge sixes off Ravichandran Ashwin in a single over.
Soon after, Jamieson tried to take on Ashwin again, but was deceived in the air, holing out to long-on to end on 44. De Grandhomme also perished, having pushed the team past 300, becoming Ashwin’s third wicket.
Trent Boult, however, wasn’t done yet, swishing around his bat for some adventurous hits, striking five hits to the fence and one over it during his entertaining 24-ball 38. His knock provided invaluable runs down the order, helping New Zealand recover from 225/7 to end up on 348, with a healthy lead of 183 runs in their bag.
India began the chase steadily, with Mayank Agarwal showing early positivity, creaming the first delivery he faced through covers. Prithvi Shaw, on the other hand, looked uncomfortable against the moving ball, squaring up several times against Tim Southee. It was Boult, however, who provided the breakthrough, slipping one on the leg side, which Shaw lobbed to the left of square leg, where Tom Latham took a brilliant diving catch.
It was Agarwal and Cheteshwar Pujara’s rebuilding act then, that provided India with some hope. Pujara, in particular, was tied down by the Kiwi pacers, subjected to a barrage of short-pitched deliveries, with runs eluding him. On one instance, New Zealand packed his off-side field, stationing two short covers for him.
He quietly accompanied Agarwal, who became increasingly positive in the second half of the second session, even waltzing down the track and clanking Ajaz Patel for a six down the ground. It took Pujara 75 deliveries to move from single to double-digits. Off the 81st delivery, the last of the session, he shouldered arms to a Boult in-swinger and lost his off-stump.
As soon as the last session began, New Zealand tightened their stranglehold; Agarwal was stopped on 58 when he flicked a wide delivery to the keeper and was sent back, a DRS challenge notwithstanding. Kohli had an edgy start, with Southee and Jamieson hurling short-pitched stuff from round the wicket and packing the leg-side field to cramp him. A bumper from Boult brought his end, forcing him to pull, with the ball taking an edge along and giving Watling his second catch of the day.
Under fading lights, New Zealand's bowlers continued to send down probing line, challenging Hanuma Vihari and Ajinkya Rahane with short, sharp channels. However, the two practised complete restraint, ending the day unbeaten to leave the visitors in some hope.