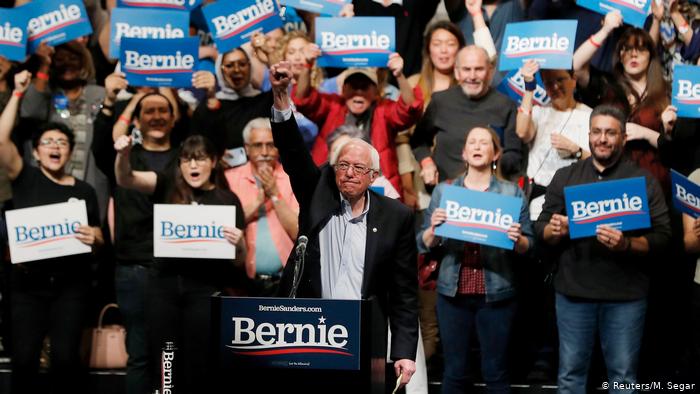 US Senator Bernie Sanders was declared the clear victor in the Nevada Democratic caucuses on Saturday, bringing him a step closer to his goal of running against Republican President Donald Trump as the Democratic nominee in the 2020 US presidential election.

The 78-year-old senator from Vermont, a self-proclaimed democratic socialist, was widely expected to win in Nevada, having already performed well in nominating contests in Iowa and New Hampshire earlier this month.

In a show of confidence, Sanders left Nevada before the caucus results were announced, to woo voters in Texas, an important constituency for the "Super Tuesday" contest coming up in 10 days.

"When we come together there is nothing we can't accomplish," he said at a rally in El Paso, Texas.

Nevada's voter constituency is notably more diverse than those found in the predominantly white states of Iowa and New Hampshire. Nearly one third of the state's population is Hispanic, with entrance polls on Saturday showing over 53% of this demographic planning to support Sanders.

The senator also received strong support from families with ties to unions and from college-educated white women.

Over 75,000 Democrats, more than half of whom were first-time voters, participated in early voting in Nevada, which means the party could surpass its turnout record for the state of 118,000, set in 2008 when Barack Obama ran.

Sanders has risen to popularity on his "Medicare for all" healthcare plan that would provide universal coverage in the US. Democratic rival Senator Elizabeth Warren supports a similar proposal.

Warren, along with fellow candidates Joe Biden and Pete Buttigieg, fought for a distant second behind Sanders.

Following the results, Biden was upbeat, declaring himself back in the race after underperforming earlier in the month.

"Now we're going on to South Carolina to win and we're going to take this thing back," he said to supporters on Saturday.

The next contest will be the South Carolina primaries on February 29.