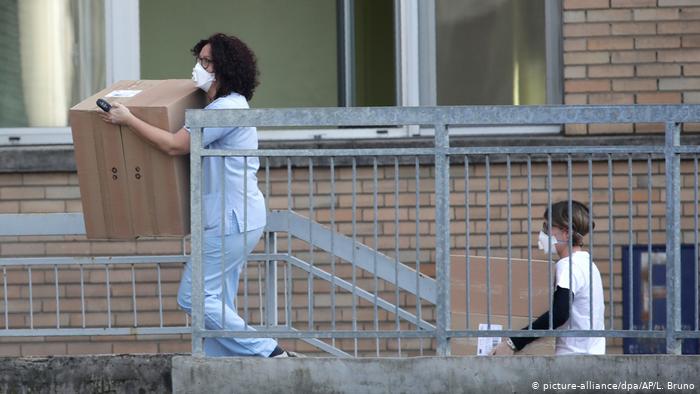 An Italian man infected with coronavirus died on Friday, becoming the first death of a European national linked to the deadly illness that has spread across the globe.

The elderly man died in a hospital in the northern city of Padua, Italian Health Minister Roberto Speranza said on Friday. He said that the 78-year-old had been in the hospital for 10 days for an unrelated illness.

The victim was one of two people who had tested positive for COVID-19 in the Veneto region. Last weekend, France reported the first death in Europe from the virus — a Chinese tourist who had been visiting Paris.

Scramble to contain the outbreak

Earlier in the day, officials had ordered schools, public buildings, restaurants and coffee shops in ten towns in northern Italy to close after a cluster of 15 other cases emerged.

All cases were located in the Lombardy region, where a 38-year-old man fell ill with the virus after meeting someone who returned from China in late January. Five doctors and nurses and several patients were infected at the hospital in Codogno where he was treated.

Three other people, who all visited the same cafe in the Lombardy region, also tested positive for the virus.

Hundreds of people have been put in isolation and are being tested for the virus, Italian health officials have said. Over 150 co-workers of the 38-year-old as well 70 medical staff at Codogna hospital are among those being tested.

The new cases represent the first acquired through secondary contagion in Italy and brought the total number of confirmed cases up to 17.

The COVID-19 virus has now infected more than 77,000 people worldwide, with China, where the virus originated, by far the worst affected. China has reported some 2,345 deaths, mostly in the central province of Hubei.

Prime Minister Chung Sye-kyun called the situation an emergency. The cities of Daegu and Cheongdo have been designated special care zones.

Iran is also struggling to contain the virus within its own borders. Authorities there announced 13 new cases as well as two deaths from the COVID-19 virus on Friday. Most cases here are linked to the holy city of Qom, but people are infected in other cities too.

Lebanon also reported its first case — a 45-year-old woman who had recently traveled to Qom.

Authorities in Israel confirmed its first case — a passenger on the virus-stricken Diamond Princess cruise ship. The infected person had initially tested negative to the virus on arrival in Israel.

What's the situation in South Korea?

Most of the cases in South Korea center around the Shincheonji Church of Jesus, a religious sect in the southern city of Daegu. More than 120 members of the church have been infected.

The government is trying to identify those who might have come in contact with infected people and diagnose the disease at the earliest opportunity.

"We will proactively provide necessary assistance including sickbeds, personnel, and equipment," the prime minister said in a meeting with senior officials.

The mayor of Daegu advised its population of over 2.4 million people to stay indoors.

Currently Iran has 18 confirmed cases of coronavirus. Four of Friday's 13 new cases were confirmed in Tehran, while seven came from Qom and four were in the northern Gilan province on the Caspian Sea, health ministry spokesman. Kianush Jahanapur said.

All cases outside of Qom have been linked to the holy city. Qom has now imposed special measures including closing schools and universities.

Iran has stopped short of a complete ban on its citizens traveling to China, but in the last two weeks the country grounded all flights to China with the exception of planes carrying cargo only. Iran's civil aviation authority spokesperson said these are under supervision and checks are being carried out.

An Iranian official was also confirmed positive for coronavirus on Saturday, according to state television.

In Turkey, officials have begun screen travelers arriving from Iran at border gates and are refusing entry to anyone with signs of illness, Turkey's health minister said. He added that Iranians who have traveled to Qom in the past 14 days will be refused entry.

Kuwait Airways said it will suspend all flights to Iran.

Speaking with DW, President of the EU Chamber of Commerce in China Jörg Wuttke warned of short- and long-term effects the virus will likely have on the Chinese economy.

Supply chain disruption could have greater effects than those seen after the 2002-2003 SARS outbreak, he said.

"The economy is going to take a major hit in the first quarter...Transportation is 80% down. Hotels and restaurants are all closed...there is not much activity if any at all. Manufacturing is partially coming back...but the first quarter is basically gone."

Nevertheless, he was optimistic that international investors would retain interest in the country.

"China is the place to be. There is no second China," he said.

The man, only identified by his family name, Jiang, on January 24 drove his car back to a city in northwestern Hubei from eastern Ezhou, where he was visiting his sister, who had been infected, according to the Hubei government website. He had a fever on February 20 and tested positive for coronavirus a day later, the statement said.

Japan confirmed four new coronavirus infections on Saturday, as a high school where an infected person taught was closed for two days. The teacher, a woman in her 60s in Chiba prefecture, went to work while showing symptoms. She first showed symptoms on February 12 and was hospitalised on February 19, according to local media. Her school is set to close for two days from February 25.

The second case was a woman in her 30s in the same prefecture, who has been hospitalized but is not showing any symptoms, according to a Chiba government official.

The additional two cases are a man in his 60s and another man in his 50s in Kumamoto prefecture in southern Japan. Ninety-nine people in Japan have so far tested positive for coronavirus.