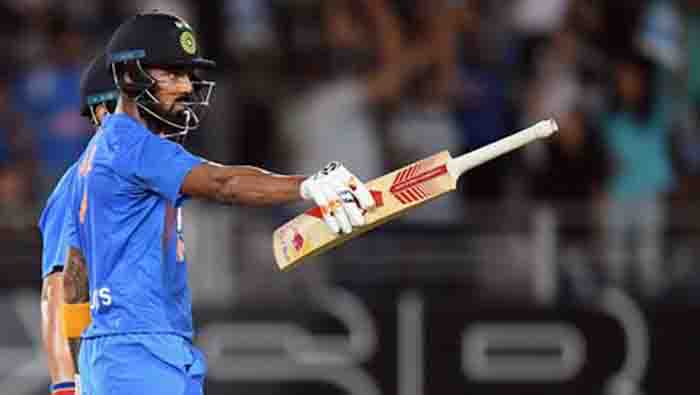 New Delhi: India opener KL Rahul, who has also donned the role of their full-time wicket-keeper recently, has admitted he enjoys the glovework as much as his batting.

Rahul hit a 27-ball 56 and shared a 99-run stand with Virat Kohli in the first T20I against New Zealand in Auckland, to set the foundation for India's six-wicket victory on Friday, 24 January.

He kept the wickets during New Zealand's innings, just like he did in the three one-day internationals against Australia earlier this month. Rahul feels that wicket-keeping helps him understand how the pitch plays, thus helping his batting.

"I'm quite honestly loving it. At the international stage, it might seem very new and it might seem like I've never kept. [But] I've kept for my IPL franchise for the last 3-4 years, and I've kept for my first-class team as and when there is an opening. I've still stayed in touch with wicket keeping," he told reporters after the first T20I.

"I enjoy staying behind the stumps and it also gives me a great idea about how the pitch is playing, and I can pass on that message to the bowlers and the captains with field-sets and everything. As a keeper, that's also your responsibility to stay active and pass the message on to your captain as to what lengths are better and what I feel we can do better.

"As a batsman as well, after keeping for 20 overs, especially you get a fair idea on what are the good shots on this kind of wicket and so I'm enjoying the responsibility and so far so good for me."

Over the last year, Rahul has improved tremendously in white-ball cricket, utilising the opportunities that came his way following Shikhar Dhawan's injury in the 2019 ICC Men's Cricket World Cup. His consistent performances have now made him a regular in the side.

"That's exactly what I've learnt in the last one-and-a-half years that this is my game, where I play cricketing shots. I've been blessed with shots all over the ground but getting into good positions and striking the ball with a good technique is my strength.

"If I can carry forward that belief and mind-set into each innings it'll help me more and I can be more successful and in return, I can be more consistent for the team's sake."

The Karnataka batsman attributed his success to domestic cricket, which helped him get back in the national team. "I've been part of the team for a long time and a lot of tours I just go sit outside and don't get game time. And suddenly get a couple of games and you don't feel the same. As a batsman, you need some time in the middle."

Consistent batting at the first-class level aided in the 27-year-old's resurgence. "You need some confidence and that doesn't come in the nets or anywhere else. You need to be in the middle and get runs and that's the only way that I could have got my confidence to go back, play some first-class cricket, less pressure and I could focus on myself, my skill and my cricket.

"So, that's the only thing that worked really well for me and obviously it helps that I got runs there as well and I could come back into the Indian team with runs behind me," he added.