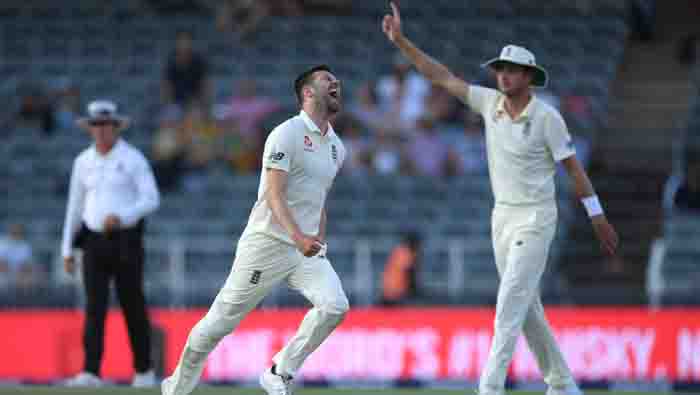 Johannesburg: England have seized control of the fourth Test with South Africa, reducing the hosts to 88/6 after putting 400 on the board at The Wanderers.

Ollie Pope and Joe Root built on their budding partnership from the previous evening by taking England to 258/4 before Pope, who had crossed fifty for the third time in the series, dragged a delivery from Anrich Nortje onto his stumps after the drinks break in the morning session to depart for 56.

Root followed shortly after to the same bowler for 59 and Sam Curran edged behind from the very next ball to compound England’s misery. With Jos Buttler and Chris Woakes following to leave England 318/9, South Africa would have been pleased with their recovery.

However, Mark Wood and Stuart Broad then turned the tide with an enthralling 50-ball stand of 82 that was filled with some heavy blows over the rope. Broad, the No.11, was particularly eye-catching, his freewheeling swings resulting in four sixes.

By the time their stand came to a close, England had reached 400 for the second Test in a row since December 2017.

England’s momentum continued with the ball and although Pieter Malan and Dean Elgar showed resistance, they struggled to make the scorers work hard. When Malan edged behind a 94mph delivery from Mark Wood in the 19th over, South Africa had just 29 on the board.

Rassie van der Dussen’s first innings as a Test No.3 was one to forget as he was squared up by Curran to depart for a duck, but the most disheartening moment of the day for the Proteas came from a tame cut off Elgar’s blade that offered the simplest of catches to Woakes at point.

Faf du Plessis’ poor run of form continued as he fell lbw for 3 and Temba Bavuma could muster only 6 on his Test return.

Nortje, who had collected his maiden Test five-for earlier in the day, came out to face the music late on as nightwatchman but with the last ball of the day Wood – unable to keep out of the action – extracted his outside edge, with the ball gobbled up at gully.

At the other end Quinton de Kock looked in fine touch to finish unbeaten on 32 but for South Africa to have any hope of saving this Test he will have to deliver something very special on day three.