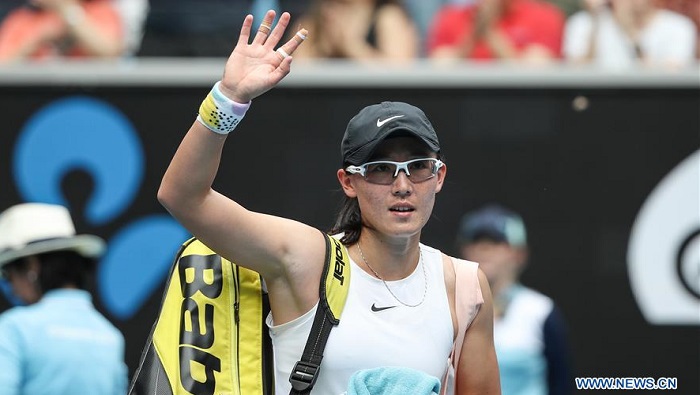 MELBOURNE: China's Zheng Saisai was unable to stop Naomi Osaka at the Australian Open on Wednesday, losing 6-2, 6-4, despite causing an unusual level of angst for the defending champion as she progressed to round three.

Osaka predicted that Zheng's slice would frustrate her during the match and she was not wrong, with a combination of the windy conditions and Zheng's spin shots throwing her off balance at several turns.

The world No. 3 dropped and kicked her racquet after losing her serve in the second set, in an unusually emotional display for the soft-spoken Japanese player.

"I definitely got very frustrated in the second set. And it's something that I knew would happen but I didn't know exactly what she would do to make me frustrated," Osaka told Xinhua after the match.

"She was slicing and dicing and I was like, can I just hit a winner already and she was like, no."

At first, it seemed like Osaka would claim the match with relative ease, opening up early on Zheng and breaking her first serve.

However, the Chinese player responded in kind, breaking Osaka back and raising the pressure.

The wind may have played a part in Zheng's double fault to drop serve again. This time she was unable to manage a response, allowing Osaka to edge ahead and claim the first set.

Osaka's frustration peaked in the third game of the second set, upset at being baited by Zheng to make mistakes.

Showing some of her world champion composure, Osaka regrouped and took advantage of two quick misses by Zheng in the next game to break back.

Osaka's powerful return forced several errors from Zheng, putting the reigning champ back on top of the second set and eventually the match.

Moving into round three, Osaka joked that she hoped to keep a better grip on her racquet in-between points, and focus on remaining consistent instead of airing her frustrations.

"I think that I just really have to focus on knowing that I'm going to have really tough matches and I have to find a way around that," Osaka said.