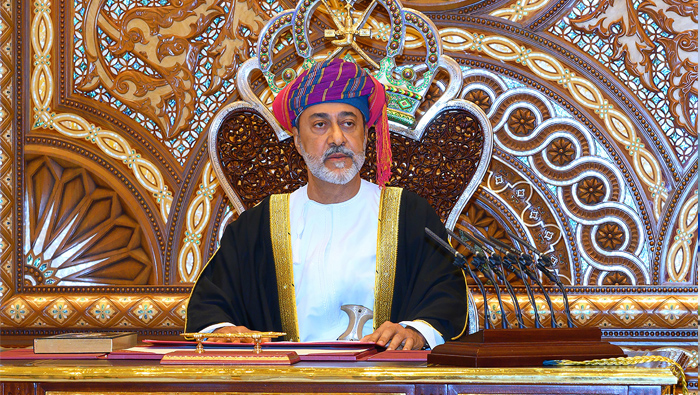 Muscat: Omani nationals have expressed confidence in the abilities of His Majesty Sultan Haitham bin Tariq bin Taimur to continue to develop the Sultanate, and build on the lasting legacy left behind by late His Majesty Sultan Qaboos bin Said bin Taimur.
During his Royal Speech, upon ascending the throne, Sultan Haitham said Oman owed what it was today to the tireless efforts of the late Sultan Qaboos. In his speech, he said, “He set up a modern state from scratch, a country that is now recognised by all, far and near.”
Ali Ahmed Al Shamsi, the Acting Governor of North Al Batinah, and the Wali of Sohar, said, “It is impossible to count the achievements of late His Majesty from 1970 to 2020.
“Back then, there were only two schools, no universities, no hospitals, no roads, no infrastructure, the people were not well off, and the country was divided.’’
“The late His Majesty Sultan Qaboos came to the throne when he was only 29 years old, in the prime of youth. He personally oversaw the unification of the country, demarcation of borders, elimination of strife, and improvement of the country’s wealth,” he added.
“He established the infrastructure, schools, universities, colleges and hospitals. Today, Oman has great regional and international respect.”
Sulaiman Al Sulaimi, a member of the Executive Committee of the Oman Road Safety Association, said, while recalling the efforts of late His Majesty Sultan Qaboos, “Since the dawn of the Renaissance, late His Majesty made people the centre of development. There is no doubt that the legislation related to traffic safety comes from his keenness to preserve the gains of this Renaissance through the protection of people, and to lessen the tragic losses of accidents. Since assuming the reins of government – may God have mercy on him – he has made the Omani people the focus of attention.”
Al Sulaimi also shared his aspirations for Sultan Haitham bin Tariq bin Taimur, “We are confident that under the leadership of HM Sultan Haitham, Oman will continue to progress and prosper and contribute to the journey of sustainability, both locally and internationally. We have strong faith on his wisdom, and wish him every success building on Oman’s achievements and great legacy.”
Commenting on the legacy of the late HM Sultan Qaboos bin Said bin Taimur, Dr Said Al Sawafi, a co-professor at the Department of Islamic Sciences at Sultan Qaboos University’s College of Education, said, “The late His Majesty was a man who brought calm, awareness, culture and wisdom to Oman, and he chose Sultan Haitham because he felt that he had the same qualities, and is therefore the personal choice of late Sultan Qaboos.
“I hope that he follows the path set for the Sultanate by the late HM Sultan Qaboos, who is the founder of our modern nation of Oman, and continues the modernisation, development and attention to the economy,” he added. “We hope God gives him success in this endeavour.”
“Words are not enough to explain what late His Majesty Sultan Qaboos did for us,” admitted Jassim Al Balushi, the deputy head of the Department of Education and Humanities at the College of Engineering at the National University of Science and Technology. “Oman would not be known around the world without his achievements. What he did for the country in the areas of healthcare, in education, in terms of social development, it completely changed Oman, and we Omanis will always be grateful for all that he has done.”
“In terms of the new Sultan, His Majesty Haitham bin Tariq bin Taimur, we hope that he will continue to develop the areas of education and the economy,” added Al Balushi, as he wished him success during his reign. “May he continue to develop the economy, so that young Omanis get good jobs in the future, and expand education, so that they can serve the country well. He was the personal choice of our former Sultan, so all of us Omanis are confident that he is the right man to take Oman forward.”
India’s and Pakistan’s ambassadors to Oman, Munu Mahawar and KK Ahsan Wagan, were also full of praise for the achievements of late His Majesty Sultan Qaboos.
“He was a visionary leader and a statesman under whose leadership Oman was transformed into a modern developed nation,” Mahawar told the Times of Oman. “He was a beacon of peace in the region, who worked tirelessly towards regional peace and stability. I take this opportunity to pay tribute to His Majesty Sultan Qaboos for his seminal role in shaping the India-Oman strategic partnership. As stated by Prime Minister Narendra Modi, His Majesty Sultan Qaboos, was a true friend of India and provided strong leadership for developing a vibrant strategic partnership between India and Oman.”
He also extended his best wishes on behalf of the Indian community in Oman to HM Sultan Haitham. “On behalf of the government and people of India, including the Indian community in Oman, I extend warm greetings and best wishes to His Majesty Sultan Haitham bin Tariq bin Taimur and the government and people of Oman for the continued peace, progress and prosperity of Oman,” added Mahawar. “We look forward to working closely with the government and people of Oman to further strengthen our strategic partnership.”
“Pakistan has also lost a brother and true friend who immensely contributed to enhancing bilateral relations in various fields,” said Ahsan Wagan. “The late His Majesty Sultan Qaboos was a sincere and trusted friend of Pakistan, who made an invaluable contribution in bringing the two countries and peoples closer. I would also like to express my best wishes to His Majesty Sultan Haitham bin Tariq bin Taimur’s everlasting health and happiness and for the continued progress, stability and prosperity of Oman.”