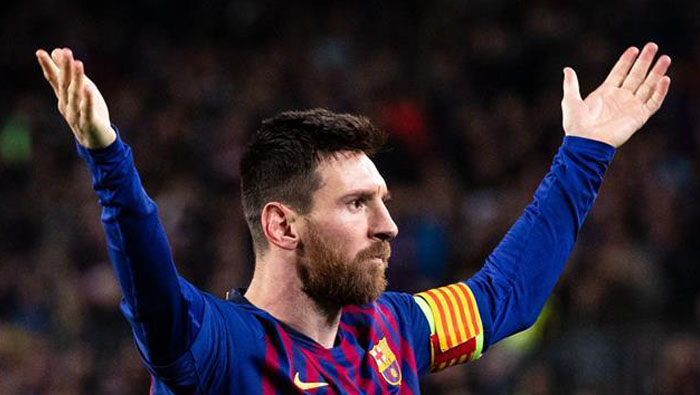 Madrid: Quique Setien kicked off his reign as the new coach of FC Barcelona with a 1-0 win at home to Granada, thanks to a goal from Leo Messi 15 minutes from time.

Barca controlled 80 percent of possession, but struggled to break down a well-organized Granada and it was not until the visitors were reduced to 10 men after Gabriel Sanchez was shown a second yellow card with just over 20 minutes to go that Messi scored the vital goal.

Granada hit the post in the 65th minute from Yan Brice, but apart from that they posed little threat in attack, although Sunday's game was far from the revolution that some may have expected after Setien replaced Ernesto Valverde on the Barca bench.

All of the goals came in the second half with the Brazilian opening the scoring following a neat chip over the keeper, before Luuk de Jong's left foot finish for the visitors momentarily leveled the scores.

Casemiro then sealed three points for Real Madrid with a powerful header, leaving Sevilla to complain bitterly about a first half goal De Jong had ruled out for an off the ball obstruction in the Madrid penalty area.

Valencia and Real Sociedad both missed good chances to close the gap on the top four as they suffered heavy away defeats, with Valencia losing 4-1 away to struggling Mallorca, while Real Sociedad were beaten 3-0 against an improving Betis.

Antonio Arenas opened the scoring for Mallorca after seven minutes before Ante Budimir netted twice to put the home side 3-0 up by halftime.

Dani Rodriguez added a fourth for Mallorca before Ferran Torres consolation for Valencia, whose captain Dani Parejo was sent off and will miss next week's game at home to FC Barcelona.

Borja Iglesias, Joaquin Sanchez and Sergio Canales all scored for Betis as Real Sociedad disappointed on their visit to the south of Spain.

Raul Garcia's penalty gave Athletic Club Bilbao a point at home to Celta Vigo, who had opened the scoring with a deflected shot from Rafinha and the visitors survived heavy pressure from Athletic in the last 20 minutes to take a point.

Raul de Tomas began to pay his record transfer fee to Espanyol with his side's second goal as they won 2-1 away to Villarreal to continue Abelardo Fernandez's successful start as coach.

David Lopez opened the scoring for Espanyol before De Tomas' goal doubled the visitors' lead before Santi Cazorla's penalty for the home side.

Aleix Vidal's goal on the break gave Alaves a vital away win against Levante and better finishing would have seen Alaves win by more goals.

There were no goals in a rainy El Sadar between Osasuna and Valladolid in a game where the home side finished stronger, after Sergi Guardiola had hit the bar for the visitors.

The round of games kicked off on Friday night as first half goals from Leonardo Cabrera, Nyom and Juan Mata gave Getafe a 3-0 win away in the South Madrid derby against Leganes, who remain above Espanyol on goal difference.