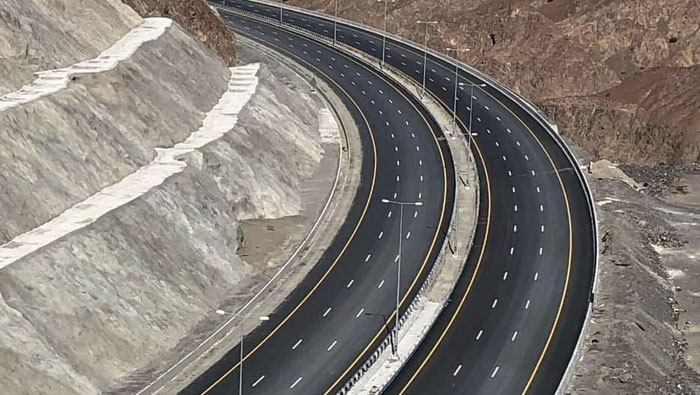 Muscat: Motorists in Oman can now use the newly-opened Al Sharqiyah Expressway, which was opened to the public on Monday. This road features two tunnels for vehicles, crossing the mountain range between Samail industrial area and Al Jardaa intersection according to the Ministry of Transport.
A statement issued by the Royal Oman Police said, “Al Sharqiyah Expressway has opened today for the traffic flow of vehicles, starting from wilayat Bidbid through Wadi Al Aqq, to the wilayat of Al Kamil W’Al Wafi with a length of 191 km.”
The opening of this expressway comes with the Ministry of Transport seeking at an accelerated pace to expand its main and secondary road network, as it continues to modernise Oman’s transport by increasing the efficiency of roads and their expansion.
While the Ministry is going to give traffic safety great importance during the design and implementation of roads, it is also working to link rural areas to urban centres by expanding a network of secondary roads in the Sultanate.
The strategic road includes three lanes for traffic in each direction and a permitted design speed of 120 km per hour, as it includes modern bridges that extend over wadi crossings of up to 90 metres in height, and the road for the first time in the Sultanate contains two vehicle tunnels with a total length of 2.1 km. The first tunnel is located at the beginning of the village of Nadab in the wilayat of Samail and is of a length of 650 metres, while the second tunnel is in the middle of a mountain range in wadi Al Aqq, with a length of 1450 metres.
Each tunnel consists of two separate tracks of three lanes in each direction, with a permitted design speed of 90 km per hour. The tunnels are designed according to the highest specifications of international standards, including all safety and security specifications.
The Ministry has announced that traffic in the tunnels will be monitored on an experimental basis for a period of three months starting from the date of the road opening, and traffic in these tunnels during this period will be limited to light vehicles only. After the end of the trial period, all heavy vehicles, except those loaded with petroleum and dangerous materials will be allowed to pass in order to preserve the safety of users. There is therefore a special exit for trucks before every tunnel during the trial period, to go to the existing single road in Wadi Al Aqq.
The Ministry called on drivers to follow the guidelines, and the security and safety procedures inside the tunnels, due to the recent incidents in tunnels and their impacts on road users in the Sultanate.