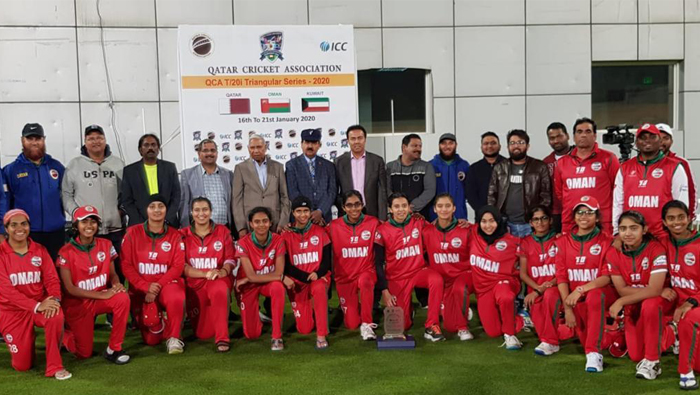 Doha: Oman Women’s Cricket Team stormed into the final of the T20 Triangular Series in Qatar by winning two of the three games it has played in the first two days of the tournament.

The Sultanate’s red brigade booked its berth in the final by handing Qatar a 61-run thrashing on Saturday after defeating the hosts by 8 wickets on Friday.

“This is the first time that Oman Women’s team is going to play a final which is a great achievement for us. The tournament enjoys a T20 International status and the girls are raring to go for what could be a great final on Tuesday,” said Oman captain Vaishali Jesrani on Sunday.

Oman were on top of the team standings with 4 points and a better net run rate from three games followed by Kuwait on 4 points. Qatar was placed at the bottom with two points it earned from its solitary win against Kuwait on Friday before losing twice to Oman on Friday and Saturday and then to Kuwait on Sunday.

Oman would have remained undefeated in the tri-series had it managed to beat Kuwait in the last-over thriller in back to back games on Saturday. It was due to play its last group game against Kuwait later on Sunday in what was seen as a dress rehearsal for the final on Tuesday, January 21.

China’s withdrawal at the last moment forced the organisers to convert what was originally to be a quadrangular series to a double league three-nation competition.

Captain Vaishali was delighted to see her team rise to the occasion and perform well against their regional rivals.

“All the fourteen players in the squad are playing fantastically well and I am extremely glad to see exhibition of high fitness levels of our girls. All the intense fitness training under our physio Vijay and coaches Haider Ali, Desmond Berhard is paying off in a big way over here. We are also indebted to the inputs of our team manager Sajith Kumar whose knowledge of the opponent teams is helping us prepare well for the games,” she added.

In its third game of the tournament on Saturday, Oman posted a fighting 130 for 6 on the board in 20 overs against Qatar thanks to brilliant batting by Sakshi Shetty (44), Hira Javed (38) and Fiza javed (18). Oman then bowled superbly to dismiss the hosts for a paltry 69 in 19.3 overs, Priyanka Edna leading the way with 3 for 15 and Bhakti Shetty bowling well for 2 wickets for only 8 runs.

Earlier, Oman lost to Kuwait by 8 wickets in a last-over finish that proved how competitive the two teams were. Batting first, Oman scored 113 for 6 with major contributions from Sakshi Shetty (26) and captain Vaishali Jesrani (26).

Sultanate’s red brigade then did a wonderful containing job by taking the game to the final over before Kuwait scraped home on the penultimate ball, scoring 117 for 2 to seal a thrilling victory.

Oman made an impressive start to the tournament on Friday, beating Qatar by 3 runs in a nail-biting contest. Oman Women compiled 114 for 3 in 20 overs thanks to impressive batting by Fiza Javed (34) and Sakshi Shetty (24).

Qatar fought well, coming close to chasing down Oman’s total but Oman captain Vaishali and bowlers held their nerves to secure the game for the Sultanate with a 3-run victory.