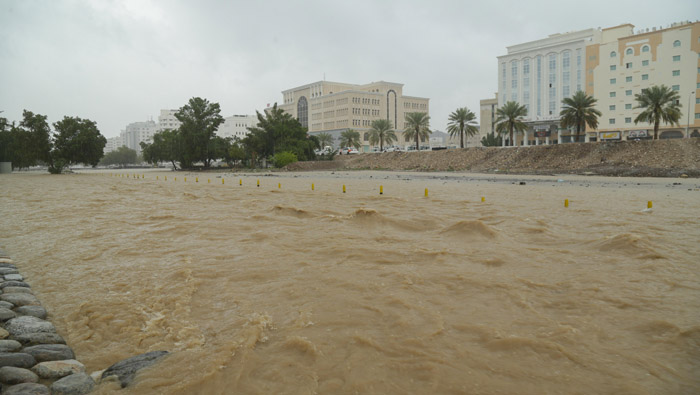 Muscat: Emergency services were called to assist people in Muscat and other parts of northern Oman, as the capital received the highest amount of rain in the country on Wednesday.
The Ministry of Regional Municipalities and Water Resources said, “Muscat governorate received the highest amount of rain over the last 24 hours. Seeb received 139 millimetres of rain. Muttrah also received high rainfall with 54 mm registered. After this, Bausher registered 37 mm of rain.”
“In South Al Sharqiyah, Sur recorded 66 mm of rainfall. Barka recorded 32 mm of rain. After this, Kasab in Musandam governorate received 31 mm of rainfall.”
“In South Al Batinah, Suwaiq recorded the highest amount of rainfall with 27 mm registered. There was also a little bit of rain in Al Dhahirah governorate, where Ibri recorded 2 mm of rain, and some places in Samail in Al Dakhliyah as well, with 2 mm recorded. There was some rain in Mhadah, but that was not a big amount”, the Ministry added.
The rain was caused due to areas of low pressure over several parts of Oman, and the capital and other outlying areas in the north receive will receive rain today as well.
Predicting this rainfall, on Tuesday, PACA said: “There will be influence of this low pressure on the coasts of the Sea of Oman, North Al Batinah, South Al Batinah, Muscat and the South Ash Sharqiyah governorates, as well as parts of Al Dakhiliyah and Al Buraimi governorates. There will be rainfall over the Musandam Governorate as well.”
The heavy rains caused flooding in many parts of Muscat, resulting in Oman’s Public Authority for Civil Defence and Ambulance (PACDA) personnel rescuing many people caught in the waters, as well as towing their vehicles to safety. On one occasion, PACDA teams were asked to respond to distress call that required them extracting 18 people, when floodwaters gushed into their homes.
“In the Mawaleh area of the Wilayat of Seeb, 18 people were rescued after their homes were inundated by heavy rains in the Governorate of Muscat,” said a statement from PACDA. “Efforts were made by the rescue teams while dealing with the reports of people getting stuck in flowing wadis and water bodies in various regions of the Governorate of Muscat as a result of rainfall.”
Locals and expats alike were asked to not venture outside their homes on Wednesday, unless absolutely necessary, as PACA had predicted heavy rainfall during the day. A statement from PACA on Wednesday morning said: “There is to be continued heavy rains of varying abundance, over the coasts of the Sea of Oman, with the majority of it being concentrated over the governorates of Muscat and South Ash Sharqiyah, particularly near Ras Al Hadd, during the next six hours, which will cause wadis to fill up and overflow, leading to moving debris and formation of stagnant pools of water.”
The low pressure trough also brought snow to Jabal Akdhar, one of Oman’s highest mountains. Saiq plateau, which is next to the mountain, recorded Oman’s lowest temperature of just 1.1 degrees Celsius on Wednesday.
Owing to road closures, and slippery conditions on the roads that were still open, schools in Muscat also decided to stop classes for the day early, and asked for parents and bus drivers to take the students home.
A statement from Indian School Muscat said, “Those parents who wish to collect their ward early due to inclement weather may come and collect the children from the respective classes. Please be informed that due to inclement weather, all afternoon section classes from KG II to grade IV remain closed on Wednesday, 15 January 2020.”
Indian School Al Wadi Al Kabir added: “Dear parents, due to inclement weather, you are requested to make arrangements to collect your ward from the respective school premises, as per convenience. There will be no classes for the afternoon shift today. Please do not panic.”
The British School Muscat, located in Qurum, said: “Due to heavy rainfall this morning, the site is unsafe. Therefore, BSM will be closed today, 15th January, 2020 and all activities will be cancelled.”
A statement from The American International School Muscat read: “With the intense rain now starting in many areas which is affecting transportation, as well as road closures, we regret that TAISM will be closed today. We apologise for this late notice. However, student and family safety is of our greatest concern.”