His Majesty the Sultan gives audience to US Presidential delegation 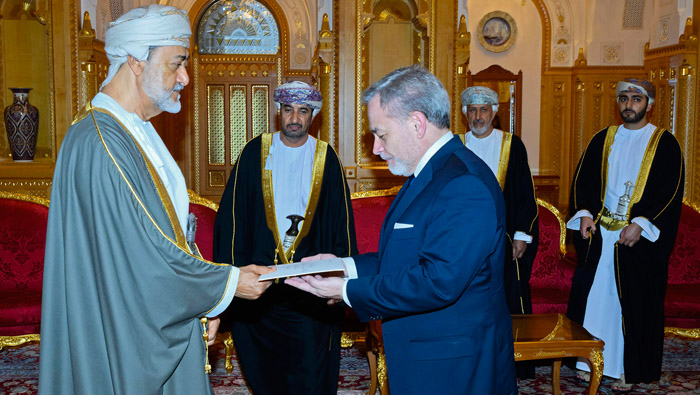 Muscat: His Majesty Sultan Haitham bin Tariq bin Taimur received a written message from President Donald Trump of the United States of America.
This came when His Majesty gave an audience at Al Alam Palace yesterday to a US Presidential delegation led by Dan Brouillette, US Secretary of Energy, who arrived here to convey condolences on the demise of His Majesty Sultan Qaboos bin Said bin Taimur.
During the audience, the US official and his accompanying delegation conveyed condolences and sympathy on behalf of the American leadership, government and people on the demise of the greatly missed Sultan.
On his turn, His Majesty the Sultan expressed his utmost thanks and appreciation to the US official and his accompanying delegation for their sincere condolences and sympathies. The audience was attended by Sayyid Khalid bin Hilal Al Busaidi, Minister of the Diwan of Royal Court, Nasr bin Hamoud Al Kindi, Secretary General of the Royal Court Affairs, Dr. Mohammed bin Hamad Al Rumhy, Minister of Oil and Gas and Sayyid Thee-Yezen bin Haitham bin Tariq Al Said.
His Majesty Sultan Haitham bin Tariq bin Taimur also received a cable of condolences and sympathy from US President Donald Trump on the death of His Majesty Sultan Qaboos bin Said bin Taimur.
In his cable, the US President expressed his condolences and sincere sympathy. The US President added that his death is a loss not just for the Sultanate of Oman but also for the international community.
He also pointed to His Majesty’s wisdom in handling difficult issues and challenges at the regional and international levels.
The US president also reaffirmed that His Majesty Sultan Qaboos bin Said bin Taimur was a real friend and a strategic partner to the United States.