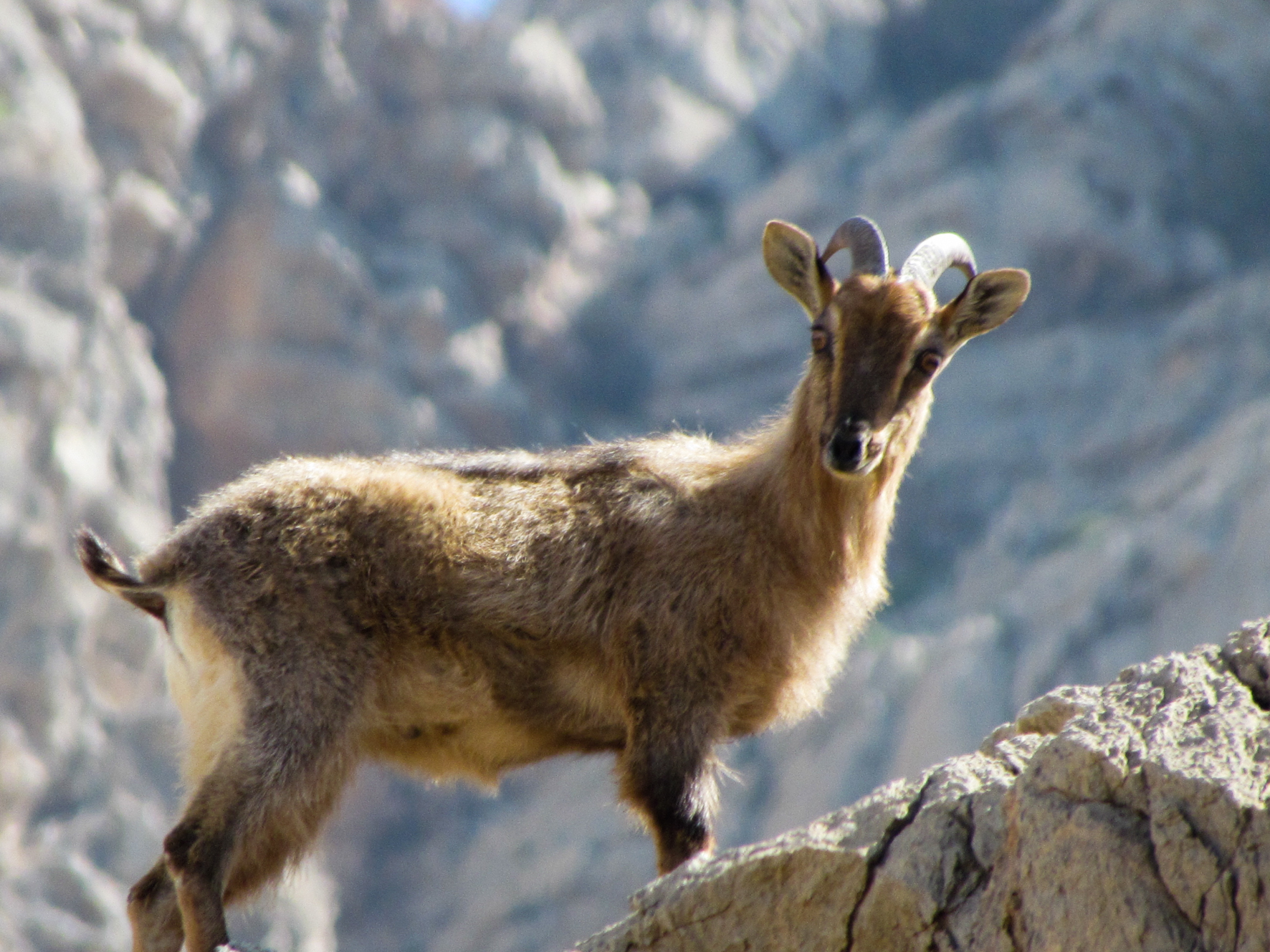 First the leader stops to rub his right-side whiskers against a wadi rock. He crosses the wadi bed and rubs his left-side shoulders. Then he leans his head into the water hole. After a few seconds he raises his head to regard us with a look of infinite indifference while his mates jumped down to him from the rocks above with great agility and lustrous eyes.

Forty-minutes southwest of Muscat, the steep and jagged slopes of Jebel Aswad, the ‘Black Mountain’, and Jebel Abyadh, part of the Wadi Sireen Nature Reserve, are home to one of the least known, least researched, most timid mammal in the world—the Arabian Tahr.

According to experts, there are now likely fewer than 3,000 breeding-age Arabian Tahrs surviving in the wild and perhaps the only healthy population on the planet is the herd here in the Wadi Sireen Nature Reserve in Oman.

In 1974 a project was put in place to conserve these endangered animals in the Sireen Natural Reserve under the management of the Office for the Conservation of the Environment (OCE), Diwan of Royal Court, making Wadi Sireen the only Tahr reserve in the world, home to one of the largest groups of Arabian Tahr, listed as endangered on the Red List of the IUCN (International Union for Conservation of Nature).

In 1975 guards from the local tribes living in the reserve (which was around 200 square km) were employed after a Royal Decree banned killing or hunting of these animals in Oman. In 1992 the total area stated for protection was expanded to around 2,400 square km, and according to officials at the OCE, as a result of these protection and anti-hunting procedures, the number of the Arabian Tahr has been increased.

OCE Research projects are now underway in collaboration with National Centre for Environmental Research and Earth Watch, to help better understand the Tahr’s behaviour. Active early in the morning from 6am till 10am and in afternoons from 4pm to 6pm, the animals make their homes in tough habitats, on steep cliffs at high altitude, it is difficult to monitor them.

“One study was about the importance of vegetation distribution throughout the mountain ranges in different altitudes from around 400 metres above msl (mean sea level) till 2,000 metres above msl to check why Arabian Tahr prefers to live in altitude between 800 metres and 1,800 metres,” said Haitham Al Rawahi, wildlife specialist, OCE. “In the survey we found that there is a relationship between the kind of vegetations found in this altitude and Arabian Tahrs. We concluded that the animals prefer certain species of plants that are found in this altitude. This is one reason of the habitat selection of Arabian Tahr. Temperature is also another factor,” Haitham said.

Although Tahr can survive long periods without drinking if good vegetation is available, in summer it will come down to drink every two or three days. “Common goats drink whenever they find water, but Arabian Tahr prefer to have one water resource and they visit the place always,” Haitham explained.

The OCE researchers have installed many cameras in critical areas of the reserve to observe the animals. The animals are found alone or in small groups, normally a male and female, female and kid or family group. Offspring are reportedly born throughout the year after a gestation period that is thought to be between 140–145 days. Males are never seen together and the shallow troughs they scrape into the ground with their horns seem to indicate that they are territorial. “The cameras installed near the pits show that these pits are used for communication among the species. They urinate in the pits or leave some excretions from their glands to mark the territory or communicate. The study is on and we didn’t get final results for this yet,” he said.

Despite all these efforts to study and protect the species, the estimated population of the Arabian Tahr is only between 2,000 and 5,000, and they continue to face threats to their survival. Habitat fragmentation due to the construction of roads and buildings in the mountains, and mining are major threats to the existence of this rare wild species.

“The major threats are poaching, diseases, and competition with local herds. Some villagers are living inside the natural reserve and near to the core zone and they have domestic goats. These domestic goats are not kept in closed enclosures. Tahrs and these domestic goats use same water holes and vegetation thus increasing the chances of sharing diseases. Also there are wild donkeys and they consume a lot of vegetation and water. Tahrs cannot go into the areas where we find donkeys and goats as they prefer to be away from human beings,” Haitham observed.

The Arabian Tahr mainly feeds on leaves, fruits, and seeds from a range of trees, shrubs, and grasses in the high mountains. The spread of human migration to the land near the mountains has resulted in domestic goats foraging in places that were once exclusively the Tahrs’. And when the animals come down from the mountains in search of water holes or to eat the fruits of a particular tree near the wadis, they become vulnerable to poaching.

The OCE continues to work to protect these rare creatures, including awareness activities and education participation with the local people living on or near the reserve. Rangers have been posted and most of them are local people who are familiar with the terrain and place. They are specialised in that habitat. Other local villagers have been hired to keep a lookout and report any poaching activities.

The reserve borders three wilayats: Amerat, Quriyat, and Dima Wa Taeen. There are two entry points at Jebel Aswad and in Jebel Abyad and the OCE has plans to set up a centre to provide information on the flora and fauna in the area with international standards of research.

There are other unique mammals and birds in the reserve, such as Arabian gazelle, Arabian wolf, Blanfor’s fox, Red fox, Hedgehog, Jayakar’s Oman lizard, common Kestrel, Egyptian vulture, Sand partridge and Oman saw-scaled viper, besides many reptiles and invertebrates. There are 400 plants in the reserve, ten of them are endemic and four are endangered species on the Red List of Omani plants.

People who want to visit the reserve have to take permission from the Office for the Conservation of the Environment, provided the visitors have to abide by some rules and restrictions.

“Usually we give permission to the public to go and see the nature reserve. But what happens some time is that the people go inside and cut trees, cook there and leave the rubbish in the protected area. This is dangerous to the wild life,” said Sultan Abdullah Al Shukhaili, media officer at OCE.

“There is also a plan to locate Tahr all around Oman. Twenty years ago some studies observed that the animals are found scattered in different parts of Oman. Today we are planning to install cameras in such areas and, if located, we will initiate conservation in these areas.

“So far we have located some parts of Western Hajar Mountains to set up cameras. This will help us to study these animals,” said Haitham adding that, “It is not that easy to get near to these animals. The landscape is so difficult for us to move in that it will take hours to get through the cliffs. The animals go very fast on these cliffs and make it up and down very easily.”

These marvellous, shy creatures are one of Oman’s great natural treasures, well worth a nail-biting climb for the committed wildlife researchers of Wadi Sireen. —[email protected]

Those interested in visiting the reserve,
can get permits in person from the Office
for Conservation of the Environment in
Al Khuwair or online omum.gov.om