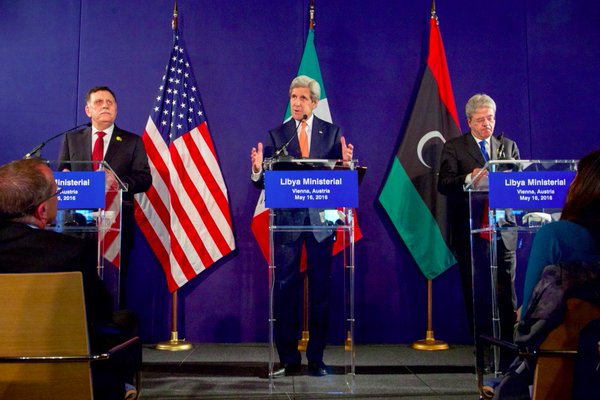 The decision on Monday in Vienna to provide 'arms' to a Libyan Government that exists in name only, the GNA, has taken the international communities stance from the sublime to the completely ridiculous.
Exactly what military kit is being supposed to be supplied? This is a critical question which needs a whole article devoted to it and cannot be dealt with herein because of space.
To keep it simple, the West has decided to supply 'arms' to a not yet in existence Government of National Accord (GNA) sometimes referred to as a Unity Government yet its core, the nine-man Presidential Council and its Prime Minister were not at all selected by any Libyan but by a combination of the UN, EU, US and UK.
Within the EU the primary mover with the most commercial interests of that side being Italy.
The GNA/PC means sevenmen (as two dropped out) who are essentially two or three members sometimes available to be seen by visiting dignitaries at a heavily fortified Naval Base a couple of miles away from the Militia controlled Mitega Airport. The PC of seven, if you will can be considered as a quorum for a yet to be selected 90 member government comprising of 30 ministers and 60 Deputy Ministers. The PC/GNA control no territory, no area of either Tripoli or Libya except for the one naval 'bunker' they can meet people in to maintain the facade that they are legitimate. Its a ' Potemkin Village' lie of epic proportions.
But wait, the best I save till last. Their military component is an assortment of militias of varying shades of extremist mainly from Tripoli, Sabratha, Zuwaia and importantly Misrata. Not forgetting in addition the forces that represent the coalition between former LIFG (read for them an Al Qaeda affiliate) which has aligned itself squarely with the Muslim Brotherhood, best described as the Sinn Fein political wing to IRA terrorists of the 70s.
So as in Syria, the Americans are going to give 'arms' to the 'good' guys but not the 'bad' ones. Good luck with that one!
How will they - the Americans - determine where these weapons will end up. IS have friends amongst the GNA's militias. Can America guarantee such weapons will not end up on IS hands?
When considering the above also consider this; a democratically elected parliament in the East, in Tobruk, selected a Government and appointed a commander of the Libyan Army, General Khalifa Hafter.
In the last 14 days that Army has secured almost if not all oil ports in the East. Hariga; Zeutina, Brega, Ras Lanuf etc and its soldiers are fortifying and holding these positions.
So whatever the puppet GNA say to its oil company based in Tripoli to sign international contracts and sell oil from the east, its not physically possible without the cooperation of the actual Libyan Army who report to their masters in the East. Oh and I forgot to mention the Russians, Egyptians and Emiratis do not recognise the GNA but do recognise the powers that be in the East of Libya. A very revealing detail is that Russia is printing 4B Dinars for the Eastern government, giving Tobruk the option to finance a breakaway State if it chooses.
Yet America and their other puppets, the UN and EU, chose the Tripoli 'Dawn' mishmash leadership of extremists over the Army. Why?
Well one consequence is, for some yet unknown strategic reason, to provoke East Libya to secede and create their own country by a Unilateral Declaration of Independence (UDI).
Another possibility is the newly armed extremist militias of the GNA will by pass fighting IS, who if they have any sense will lie low in Sirte city, and attack their enemy, the Libyan National Army (LNA).
The latter possibility is the most likely.
For this reason alone, it is right to describe the pre-agreed decision to 'arm' on Monday the GNA, literally insane.
The PC/GNA bring absolutely no unity whatsoever to Libya.
Now consider a further problem. There is an enclave, a small city set in a high impenetrable mountain to the West of Tripoli called Zintan. They are well known as fierce highland fighters; they hold Saif Gaddafi; they also control the gas and oil pipelines that flow through valves in their territory which is to the west of Tripoli that pipe to Zawia where the Italians, Norwegians and Spanish have huge oil and gas assets and a port.
The UN, in their wisdom, last week sent their military advisor, a serving Italian general, by plane to Zintan to supposedly negotiate. Barely had the plane touched down when he was almost chased back on to his aircraft to make a hasty retreat. Zintan are loyal to the Libyan National Army.
The final consideration and maybe the most important one is a pragmatic one; that loyalty has a price and eventually if the West conjures sufficient money - Libyan money frozen by the EU and UN - to be received by the PC/GNA and with that they may be able to 'buy', there is no other way to say it, the loyalty of any Libyans in the West or East but that would only be a temporary 'fix'; it wouldn't buy them indefinitely.
So in closing WHY is the International Community persisting with this charade of a GNA?
If as a reader you are expecting an answer, I must regretfully say I have none. It makes no sense whatsoever.
The West's strategy, if one can call it that, reminds me of an old Orwellian type adage that seems the only appropriate explanation:
"Make the lie big, make it simple, keep saying it, and eventually they will believe it"
But to what end is beyond my comprehension.
The Libyan quagmire will inevitably continue. - Exclusive to Times of Oman