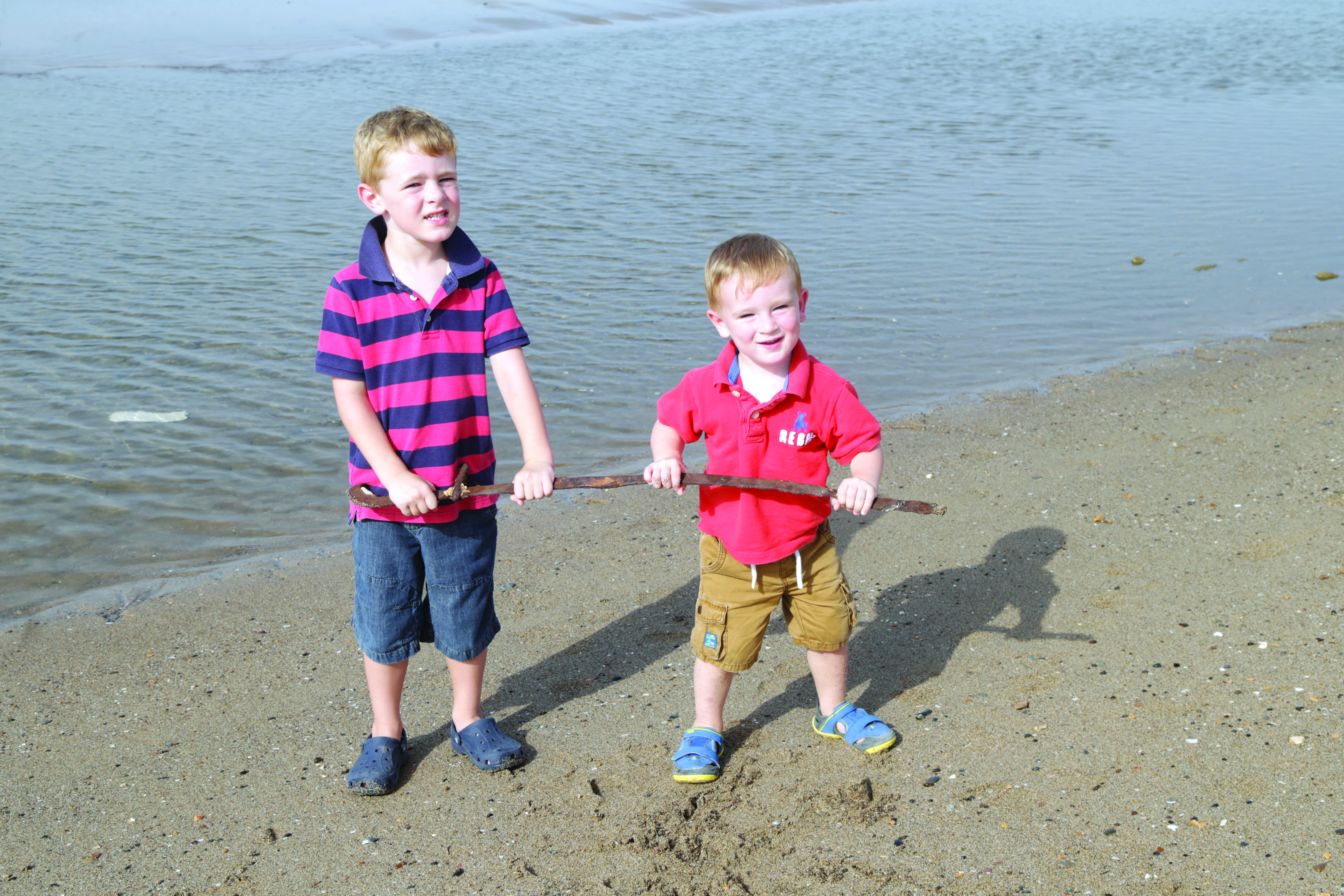 Muscat: What is thought to be an ancient 18th century Persian ‘Shamshir’ (sword) has been found at the Al Hail beach by a British expat family.
While on an early morning treasure hunting trip to the beach, the family with two young boys, Mackenzie, 4 and Dexter, 2, their mother and grandmother, were searching the shore for interesting shells and unusual stones, while enjoying a bit of paddling in the cooling waters.
It was then that Samantha O’ Mahony, the mother of the two boys came across a long piece of corroded metal, caught among some of the larger rocks on the shore line. Assuming it was a discarded piece of junk metal, she walked past it; but after a few minutes of deliberating what the shape reminded her of, she decided to go back and have another look.
Having visited several forts and castles in Oman, she thought the item vaguely looked like a very rusted and blunt sword from one of their exhibits. Upon closer inspection, it became apparent that the piece of metal was in fact, shaped just like a sword.
The family assumed that after a particularly stormy high tide, the sword had washed up onto the beach and nestled among the larger rocks. “It had clearly spent some time in the water due to the amount of corrosion and coral that had disfigured its once gleaming surface,” said O’ Mahony.
“As the sword has dried out, the coral started to fall off revealing the curved blade, which is 31 inches long, with an eight-inch long hilt. Part of the guard and the scabbard are missing; there are no visible signs of engraving. The blade appears to have lost its tip, perhaps in battle or an enthusiastic dance, where it was subsequently tossed into the sea; and there are slight twists in the blade, perhaps due to the rough seas smashing it against the rocks,” she added.
Perhaps the sword has seen better days, but it is an exciting piece of history and you can’t help but sit back and imagine what adventures it has been through.
“Mackenzie was particularly excited to see the sword and was keen to share his enthusiasm with his father, Michael, who was working at the time, and so the sword was taken home. If we had left the sword on the beach, it may have been washed away, and then who would have believed us that we had found a sword on the beach? It’s not something that happens every day.”
Although the two young boys are delighted with their ‘treasure,’ the family would like it to be housed in an appropriate museum since they have limited knowledge of Middle Eastern arms and their research has purely been based on comparing archived images with that of the actual shape of the sword.
If anyone has further information about the exact classification of the sword or would like to accept it as an exhibit in their collection, please contact the newspaper directly.