Barca must keep their heads and focus on football - Luis Enrique 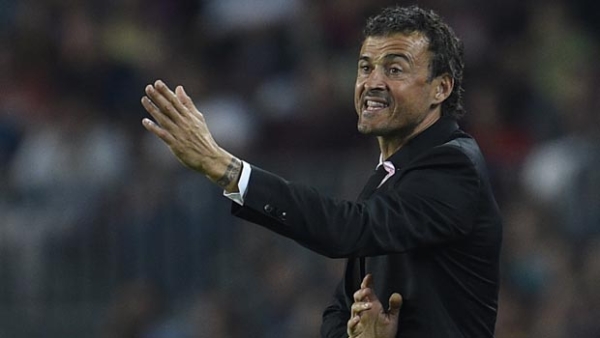 Barcelona: Barcelona coach Luis Enrique has urged his players to keep their heads in Sunday's crucial local derby at home to Espanyol, where his side could clinch a 24th La Liga title.
La Liga leaders Barca will retain the title if they beat Espanyol in the penultimate game of the season and Atletico Madrid lose at bottom-placed Levante and Real Madrid fail to beat Valencia.
Barca have 85 points, the same as Atletico and one more than third-placed Real, but top the league due to their superior head-to-head record against Atletico.
Espanyol are 14th in La Liga and took a giant step towards survival by beating Sevilla last week to move on to 40 points but they have not yet guaranteed their top flight status.
Espanyol held Barca to a tense goalless draw in January and the two sides met again in a two-legged King's Cup tie, when Barca won a feisty first leg 4-1 as Espanyol had two players sent off.
"These games have different circumstances than usual because they are derbies, and if you add the fact that everyone needs points then it's even more significant," Luis Enrique told a news conference on Saturday.
"There's always more tension in these games than normal but I hope we focus on the football and that the tension is secondary, but we know it exists. I expect a big atmosphere and a lot of support from our fans."
Dropped points in one of their remaining games could hand Real or Atletico the title, but Luis Enrique denied his side were under pressure.
Barca put a four-game streak without a victory behind them by winning their last three encounters.
"I don't think we're in a delicate situation, we've won our last games by playing well," he said.
"We've lost our advantage because our rivals won their games but everyone here knows their function and we aren't going to give anything more away."
The build-up to Sunday's game has been dominated by talk of a goal almost a decade ago when then Espanyol striker Raul Tamudo netted an 89th-minute equaliser at Barca in a 2-2 draw to hand the 2006/07 title to Real Madrid.
Luis Enrique, however, laughed off suggestions that that match could be significant.
"I want us to be better than Espanyol and deserve to win, that's all I'm worried about," he said.