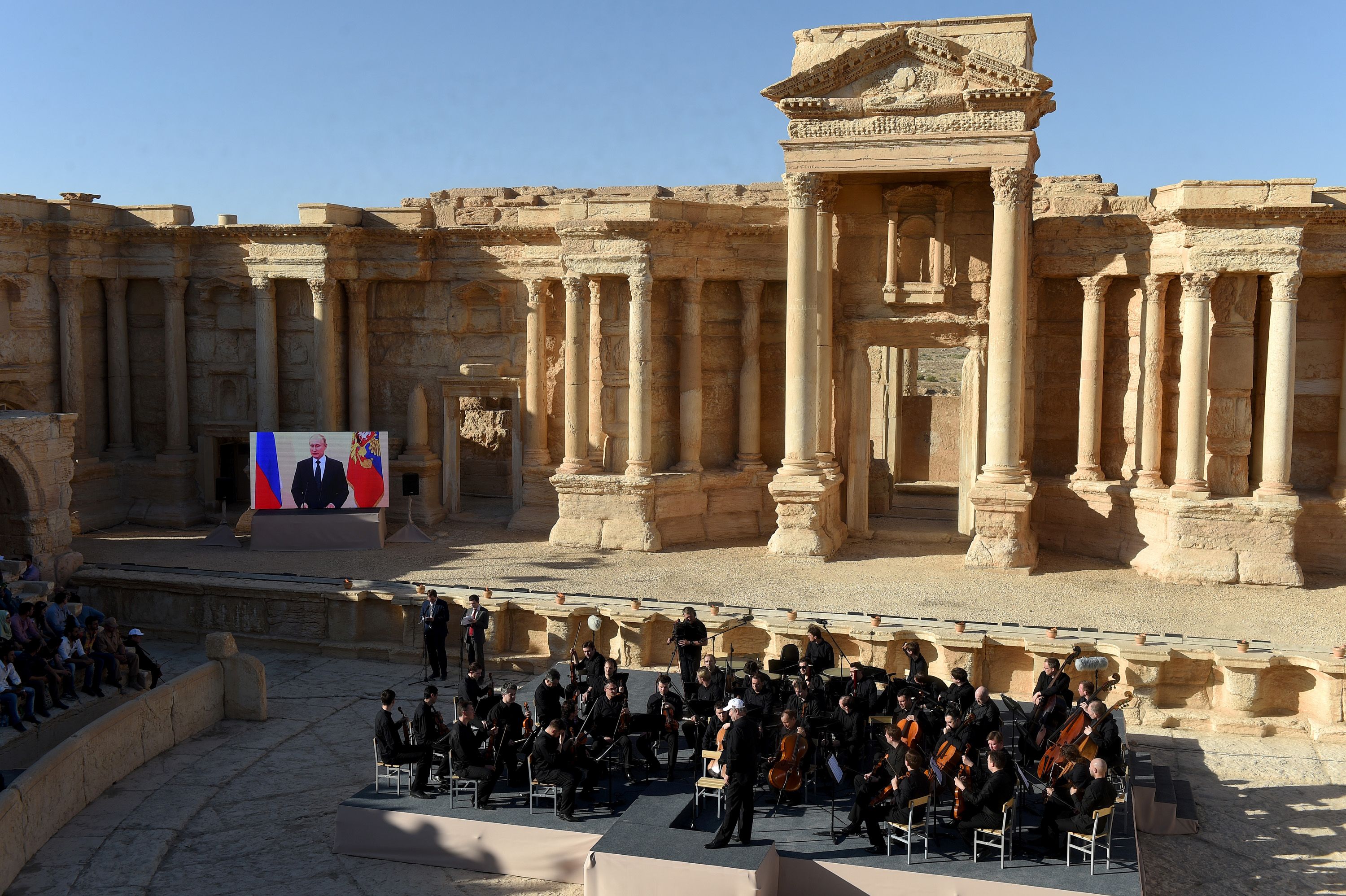 The writer Peter Pomerantsev has described Russia as a “post-modern dictatorship.” President Vladimir Putin and his friends vividly illustrated that description Thursday when the famed orchestra of St. Petersburg’s Mariinsky Theater played a concert at Palmyra, the archaeological site that Russian-backed Syrian troops liberated from the IS in late March.
Not long before the ruins of this once vast city were retaken, Putin had announced a Russian pullback from Syria, claiming that the military mission had been accomplished. Yet Thursday’s concert sent an important message about Russia’s intentions in Syria: It showed Putin claiming credit for Assad’s recent success, demonstrated to the world that his forces had not really withdrawn and signaled that any peace will be made on Russian terms.
Valery Gergiev, the Mariinsky conductor and a longtime Putin supporter who backed the Russian onslaught in Ukraine in 2014, delivered that foreign policy message just by showing up. He played a similar concert in Tskhinvali, the capital of breakaway South Ossetia, in August 2008 -- less than two weeks after the Russian army claimed the region for “the Russian world,” as Putin’s supporters call it. By playing in a main square damaged by Georgian fire, Gergiev formalised the takeover. It remains a de facto Russian colony, with subsidies from Moscow forming the basis of its economy.
That the episode has now been reenacted in Syria is in itself a powerful message of support for Assad, whom the US and its allies want out. Putin reinforced that message on Thursday, addressing the orchestra and its audience via video link. “I consider it as a sign of gratitude, remembrance and hope,” he said of the concert.
The concert was also used to send a subtler kind of message to Putin’s domestic constituency and anyone brave enough to criticise his crony capitalist regime: That he is unapologetic about Russia’s domestic course and that he stands by his friends and their business practices. In a stunning reenactment of the late Russian cellist Mstislav Rostropovich’s performance of Bach music by the Berlin Wall in November 1989, the cellist Sergei Roldugin made an appearance at the concert to play the quadrille from Rodion Shchedrin’s opera “Not Love Alone.”
Roldugin is a technically accomplished musician with plenty of solo experience. So there was, at first glance, nothing out of the ordinary about his appearance with the Mariinsky orchestra, where he was principal cello in the 1980s and which he has on occasion conducted. Yet Roldugin has recently been in the news: An article about his suspicious offshore business dealings was one of the earliest parts of the massive Panama Papers investigation, which has already resulted in scandals and resignations in several countries.
Roldugin is a close friend of Putin and godfather to Putin’s first daughter, Maria. The huge leak of documents from the Panamanian offshore incorporator Mossack Fonseca also showed him listed as the owner of a number of offshore companies linked to Bank Rossiya, a financial institution controlled by a small circle of Putin associates. One of these companies owned a 12.5 per cent stake in the Russian TV advertising near-monopoly, Video International. Another acquired a measure of control over the country’s biggest truckmaker, Kamaz. A third profited from odd backdated equity exchange deals and paid $1 for the right to receive $8 million a year in interest on a loan. The International Consortium of Investigative Journalists, which published the story, strongly implied that Roldugin may have served as a front for Putin himself.
Putin has rarely responded to allegations of cronyism or corruption, but in Roldugin’s case he has been highly vocal. He states that the cellist is merely a minority shareholder who spends nearly all the money he makes on valuable musical instruments, which he brings to Russia. “The more such people we have, the better,” Putin said. “I am proud that I have such friends.”
Putin’s explanation of Roldugin’s business activities raised more questions than it answered. More money was funneled through the musician’s firms than would be necessary to buy the world’s most extensive collection of old violins and cellos. Yet no other information was forthcoming from the Kremlin or from Roldugin himself.
Now, clearly with Putin’s blessing, the cellist surfaced in the most public situation possible -- at the daring Palmyra show. He played his heart out, letting Putin’s detractors know that the Russian president would keep scornfully ignoring them.
Rolling all these messages into a classical music concert at an ancient site was almost itself a work of art. Its purpose was to assert Russia’s unapologetic might and disdain for Western opinion. Gergiev, who has often conducted in unorthodox settings, acquitted himself admirably. The international press couldn’t ignore it. It was an unqualified success.
What, however, does it say about the country that staged it, except that its leader stands by his friends and allies, no matter who they might be and in what they might be involved? Pomerantsev put it best:
If the USSR, or today’s North Korea, were ‘classic’ or ‘hard’ totalitarian regimes that rely on their own institutions and narratives, from the politburo to scientific socialism, 21st century Russia takes a much more ‘postmodern’ approach to control. Postmodern in the sense that it uses many of the techniques associated with postmodern art and philosophy: pastiches of other’s narratives, simulacra (i.e. fake) institutions, and a ‘society of spectacle’ with no substance.
In Palmyra, the spectacle was great and the messaging unmistakable. Putin’s Russia follows its own rules, whether in Syria or at home. - Bloomberg View