Cops use batons to disperse protesters in Hong Kong 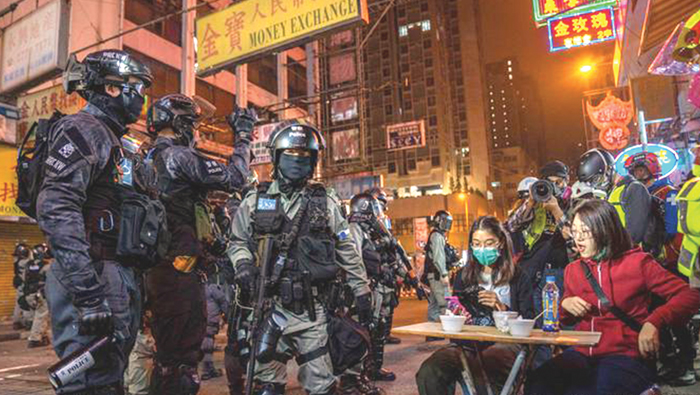 Hong Kong: Anti-government protesters in Hong Kong marched through Christmas-decorated shopping malls on Christmas Day as police fired tear gas and used batons to attempt to disperse the crowds. At least one person has been arrested and a 16-year-old fell from the roof of a restaurant after police burst into the establishment on Wednesday. He is in a stable condition.
Riot police gathered near shopping malls in three districts. The city-wide demonstrations, which have experienced a distinct lull during December, were planned to disrupt Christmas shopping and other ordinary activities in a move known as “Shop with You.”
‘The government has still not responded to our demands’
Confrontation is expected
“Confrontation is expected, it doesn’t matter if it’s Christmas,” said one protester.
“I’m disappointed the government still didn’t respond to any of our ... demands. We continue to come out even if we don’t have much hope,” he added.
Hundreds of protesters, many dressed in black and with face masks on, chanted slogans like “Liberate Hong Kong!” and “Revolution of our times!” There were reportedly no major clashes, but police employed tear gas for the first time in December on 24th and 25th. Protests in the partly-autonomous Chinese city began six months ago, originally around a controversial Chinese extradition bill. Protesters are now demanding more transparent democracy and less control from Beijing.
How is Hong Kong different to mainland China?
In almost every sense. Hong Kong uses traditional Chinese characters, while mainland China uses simplified ones. That is why dw.com offers both versions. Hong Kong has two official languages: English and Chinese — or Cantonese to be more exact, which is a dialect that is only spoken and understood in southern China.
Above all, Hong Kong and mainland China have different political and economic systems.
The former British colony has its own currency, the Hong Kong dollar.
People in Hong Kong get to vote — even though most candidates are currently nominated by Beijing. They enjoy freedoms of the press, of opinion and of assembly. Moreover, Hong Kong has a capitalist economy. And unlike mainland China, private property and real estate ownership are protected.
What is the ‘one country, two systems’ principle?
For over 150 years, Hong Kong was under British control. And in 1898, the “New Territories” were leased to Britain for 99 years. The agreement ended on June 30, 1997 after which it was returned to China. The Chinese reformist leader Deng Xiaoping coined the notion of “one country, two systems” in the 1980s to facilitate the legal return of Hong Kong.