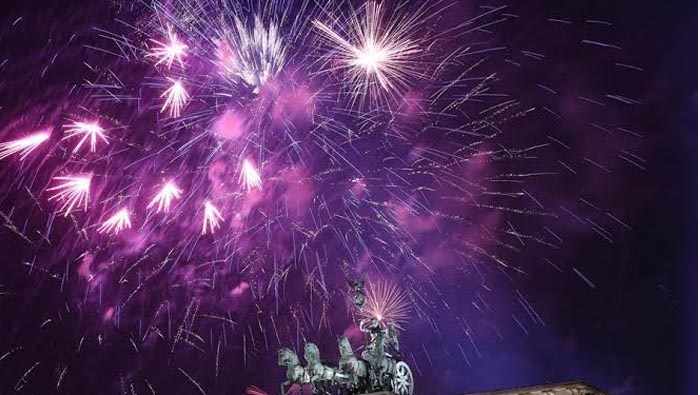 Berlin: Although public fireworks at New Year are legal in Germany, some retailers have taken them off the shelf amid a public debate on a ban on fireworks due to environmental concerns.

Last week, Hornbach, one of the largest hardware store chains in Germany, announced that it would no longer sell fireworks across Europe from 2020 onwards, "in particular for reasons of animal welfare and environmental protection."

To protect the environment and animals as well as the health of employees and customers, Germany's second largest drugstore chain Rossmann stopped selling fireworks last year. This year, the company would continue to "only sell youth fireworks", light fireworks that may be purchased and lit by minors.

Other large German shop chains like Rewe are leaving the decision to their independent supermarket operators. "The fireworks display lasts an hour, but we want animal welfare and clean air 365 days a year. That doesn't go together," said one managing director.

In addition to its crusade against dirty diesel engines, the Environmental Action Germany (DUH) has long campaigned against fireworks for driving up levels of particulate matter.

In July and October, DUH filed applications for a ban on private New Year's Eve fireworks in almost 100 German cities.

"Many hundreds of thousands of people suffering from respiratory diseases, such as severe asthma, flee their homes at the turn of the year or have to barricade themselves in air-tight rooms," said Juergen Resch, managing director of the DUH.

"We wish to continue to have joyful celebrations at the turn of the year, but without polluted air, burning houses, injured people and frightened animals by archaic black powder fireworks," said Resch.

German politicians are unusually quiet about this explosive issue. But last year, shortly after the DUH called for a ban on fireworks, Minister of Food and Agriculture Julia Kloeckner labeled the proposal as "paternalism".

Gerd Landsberg of the German Association of Towns and Municipalities was similarly critical of a fireworks ban. "What we in Germany really have enough of are prohibitions, regulations and the like. I do not think people will accept that," said Landsberg.

Although fireworks sales have started to decline in recent years, the German Environment Agency (UBA) said last week that around 4,200 tons of particulate matter (PM10) were released every year by the burning of fireworks, most of it on New Year's Eve.

However, these numbers have been rejected by the German pyrotechnical industry association (VPI), which said that fireworks are much less harmful than often claimed. Initial results of a study commissioned by VPI showed that the amount of PM10 caused by New Year's Eve fireworks was "significantly" lower than the figures from UBA and DUH.

Since the end of November, VPI has also started an Instagram channel to defend the tradition of New Year's Eve fireworks against growing calls for boycott among Germany's increasingly environmentally minded population and environmental groups.

"What would New Year's Eve be without fireworks? Without the colorful play of lights that captivates millions? Not the same anymore -- we think," VPI said on Instagram.