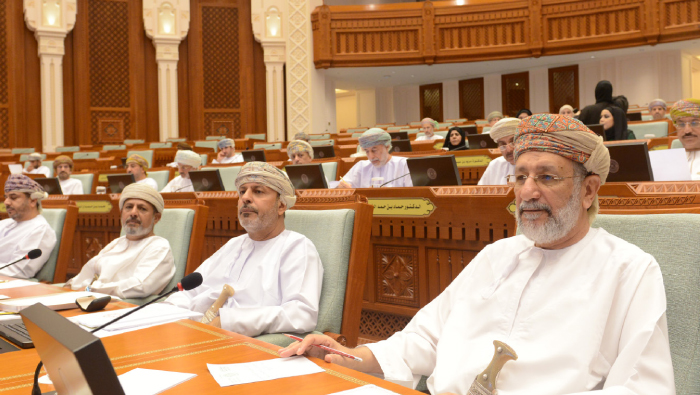 Muscat: The State Council approved 16 proposals submitted by its standing committees for study during the current session at its fourth ordinary sitting of the first annual session of the seventh term on Tuesday.
The sitting, chaired by HE. Dr Yahya bin Mahfoudh Al Manthri, State Council Chairman was held in the presence of the honourable members and the Secretary-General of the Council.
The meeting commenced with Chairman’s speech, and he reviewed the agenda items, noting that it includes a discussion of the committees’ views on the proposed amendments to their specialties and topics that the desire to study during the present annual session. It also includes the approval of the amendment to the Council’s regulations, as well as to some topics relating to the council’s work and discuss the proposal to amend the organisational structure of the council.
Further, on, the council proceeded with the discussion of the views of the Standing Committees on the proposed amendments to their competencies, which led to their approval.
The council also approved the terms of reference of the Technical and Innovation Committee, which was established by the council in the current seventh term.
These terms of reference include studying the draft laws referred to the council related to technology and innovation, proposing draft laws that fall within its jurisdiction, reviewing existing laws that fall within its jurisdiction, reviewing national strategies and studies that contribute to developing, localising, employing and transferring technology, reviewing mechanisms and technology policies, investing in technology infrastructure and technology for the proposals and study the implications and analyse developments related to technology and innovation. In addition, it includes any other topics referred by the council, the Council’s Bureau or the Council’s Chairman to the committee.
The council then proceeded to discuss the proposals submitted by the standing committees for the topics that it intends to study during the current session.
The heads of the six standing committees, namely: Legal Committee, Economic Committee, Social Committee, Education and Research Committee, Culture, Media and Tourism Committee and Committee of Technology and Innovation, reviewed the topics proposed for study.
The proposals submitted by the Legal Committee include: a study and review of the Notary Public Law issued by Royal Decree No. (40/2003), a study of the system of experts who work before the courts in the Sultanate and a study and review of the system of Real Estate Ownership in Integrated Tourism Complexes issued by Royal Decree No. 12/2006.
As for the proposals submitted by the Economic Committee, it included a study of enhancing the utilisation of manpower in the public sector, enhancing entrepreneurship and local added value, and the challenges of the national manpower in the private sector.
Proposals submitted by the Social Committee include: Review of the Marine Pollution Law issued by Royal Decree No. (34/74), study of the reality of care for the elderly in Oman, and review of laws and policies governing social housing.
The proposals submitted by the Culture, Information and Tourism Committee include a proposal to study “Omani digital cultural content” and study “Investment in traditional Omani heritage villages to attract tourism”
The Education and Research Committee submitted a proposal for a study of the status and future of teachers in the Sultanate and a proposal about the reality of scientific research and the role of private sector companies in supporting and developing it.
The proposals submitted by the Technology and Innovation Committee included: To study a draft law on “investment in technology and innovation”, to study draft law on “cybersecurity” and to study “the reality of intellectual property in the Sultanate through legislation and policies regulating it.”
Subsequently, the Council approved the proposal on amending its organisational structure, as well as reviewed a number of reports, including the report of the General Secretariat, the final report of the “Memory of the Council” project and the report submitted by Hon. Salem bin Mohamed Al Riyami, State Council member regarding the visit of the trade delegation to Hungary and Poland during October 27-31, 2019.