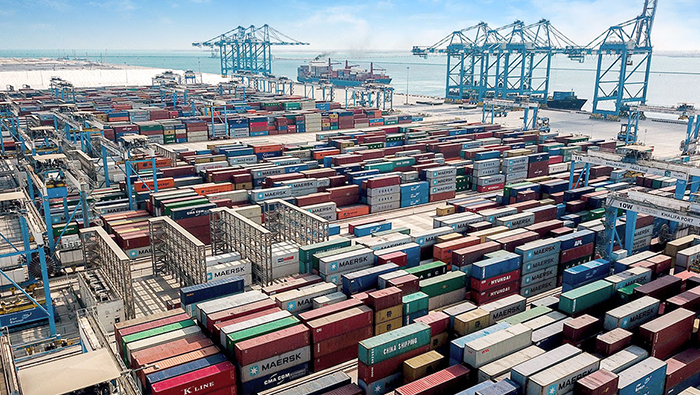 Abu Dhabi: Abu Dhabi Ports is on-pace to close 2019 with impressive year-to-date results and recording-breaking milestones, underlining the company’s continued contribution to the UAE’s non-oil GDP.
Two of these milestones were achieved in the 11 months spanning from January to November 2019. During the period, the company handled more than 20 million tonnes of general cargo across all ports, surpassing its 2018 full-year performance of 19.7 million, while its container handling performance reached 2.5 million TEUs, surpassing the 1.7 million TEUs result for entire 2018.
These achievements were bolstered largely by the growth in cargo handling performance at both Musaffah Port and Khalifa Port. From January through November, the former reported a 300 per cent year-on-year increase, while the latter saw a 25 per cent growth year-on-year. Container throughput at Khalifa Port also rose by 63 per cent year-on-year during the same period.
Over the year, another impressive result was reached in August, when during a single month, Abu Dhabi Ports handled 2.5 million tonnes of cargo, representing a new monthly cargo throughput record for the company. These banner results are a reflection of a growing global customer demand, enabled by Abu Dhabi Ports’ major capacity expansions and a diverse portfolio of services offered across its eleven ports and terminals.
Zayed Port’s cruise operations also reported substantial growth during the January to November period. Growing in popularity since its launch back in 2015, the port’s Abu Dhabi Cruise Terminal posted a year-on-year increase of 47 per cent in terms of visitor numbers, while vessel calls jumped by 51 per cent, easily surpassing 2018 figures for the whole year.
Captain Mohamed Juma Al Shamisi, Group CEO of Abu Dhabi Ports, said: “Our strong 2019 performance to-date reflects our commitment to move beyond our traditional role as a port operator and towards strengthening our contribution as a facilitator and enabler of industrial and global trade. Part of that strategic focus has led us to our long term collaborations with our local and global partners, with whom we are strengthening trade routes across Asia, Africa, Europe, and further afield, attracting new global customers, and cementing Abu Dhabi’s position as a major international trade hub.”
The start to the final quarter continued to build upon Abu Dhabi Ports’ successes reported in the first half 2019, which saw a 10 per cent year-on-year increase in general cargo across all ports, reaching 9.7 million tonnes; as well as an 82.4 per cent year-on-year increase in container volume, reaching 1.1 million TEUs. The company’s strong third quarter was highlighted by a 9 per cent year-on-year increase in cargo handling across its entire portfolio.
Abu Dhabi Ports, which operates ports and terminals across the UAE and internationally, as well as KIZAD, is one of the country’s leading facilitators of trade and investment.