Comprehensive Pakistan close in on win in Karachi Test 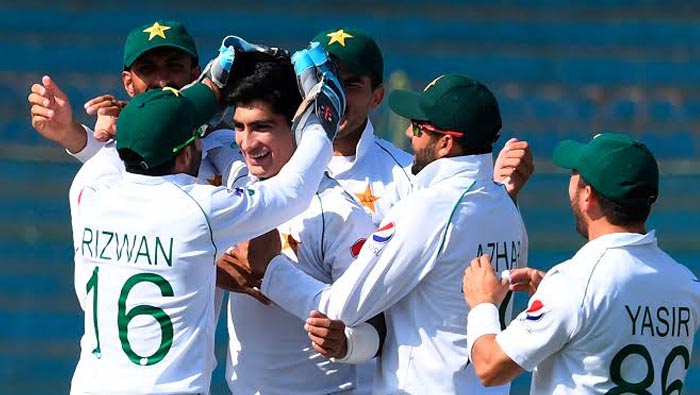 Karachi: Pakistan’s bowlers claimed five Sri Lankan wickets within 100 runs in the second innings, before running into a gritty sixth-wicket stand, but two quick wickets in the closing moments of day four has put them on verge of a series-clinching win.

Opener Oshada Fernando (102*) and No.7 Niroshan Dickwella (65) put on a 104-run partnership, defying Pakistan for the most part of the final session and clawing to some extent towards the 476-run target. However, Pakistan returned to claim clear advantage with Dickwella’s wicket with just over five overs left in the day, and Dilruwan Perera’s scalp off the final ball.

Earlier, the day began with Pakistan on 359/2, built primarily on the mammoth opening stand worth 278 runs between Shan Masood and Abid Ali. The charge continued with Azhar Ali and Babar Azam posting commanding centuries; it became only the second instance in Test cricket, that the top four batsmen had notched tons in the same innings.

Azhar Ali and Babar Azam dominated the morning session to keep the Lankan bowlers at bay. Azhar finally came to form with his first Test century since December 2018: between then, and today, he had managed a highest score of 39 in 13 innings. Babar, at the other end, looked in great nick, slamming an unbeaten, exact 100 in less than three hours, taking 131 balls.

The two took Pakistan from 400 to 500 in less than 20 overs, hardly bothered by the five bowlers Sri Lanka employed on a track that did not deteriorate as much as it would have been expected on the fourth day. The visitors found a belated wicket off the first ball of the 123rd over, when Azhar Ali became Lasith Embelduniya’s first scalp in 47 overs.

Less than 8 overs later, Pakistan declared on 555/3 at lunch, leaving Sri Lanka with 476 runs to chase in five sessions.

Oshada Fernando got going with two back-to-back boundaries off Shaheen Afridi, but Pakistan snared two wickets in six balls with Dimuth Karunaratne and Kusal Mendis falling to thick edges. Fernando, in the company of Angelo Mathews, steadied the innings to take them to 70/2 at the end of 20 overs, but Afridi removed Mathews before tea, leaving Sri Lanka with a mountain to climb.

Dinesh Chandimal and Dhananjaya de Silva departed in successive overs to intensify the slide further, with the score reading 97/5 after 32 overs. It was then that Niroshan Dickwella brought a breath of fresh air in the innings with his off-side punches, and his reverse sweeps to the spinners.

Along with Fernando, Dickwella stitched a 100-run stand, but just when it looked like the Lankans had put forth a strong resistance, Dickwella was bowled, trying a cheeky reverse sweep against the run of play.

It did not stop Fernando from notching his first Test hundred, but he ran further out of partners when Dilruwan Perera also edged one off Naseem Shah, of what turned out to be the final delivery of the day, with the tourists still 264 runs adrift.