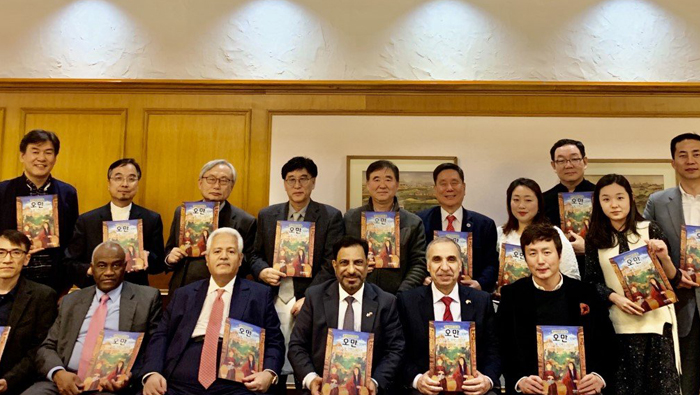 Seoul: Mohammed bin Salim Al Harthy, Sultanate’s Ambassador to the Republic of Korea, inaugurated the Korean translation of the children’s book “Oman; Homeland of Sinbad and Frankincense Land”.
This comes within the framework of public diplomacy of the Sultanate’s Embassy in the Republic of Korea.
The inauguration ceremony was attended by representatives of diplomatic missions, Director of the Institute of Middle Eastern Studies at Myongji University, Director of a multi-cultural museum, a group of academics and university professors.
The book was prepared and published in the Korean language, in cooperation between the embassy and the multicultural museum.
It is a simplified introductory book dedicated to children that includes general information about the Sultanate and its geographical location, highlights the modern renaissance of the Sultanate, reviews historical, cultural and artistic aspects, and highlights the personality of the Sindbad of Oman and the role of the Sultanate in maritime navigation, in addition to Oman the land of frankincense, the benefits and uses of Omani frankincense.
It also displays pictures on features of Oman and various tourist attractions.