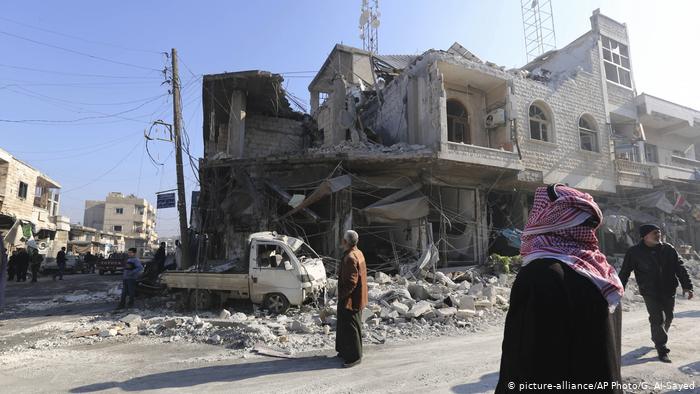 Fears about an aid crisis in the Syrian province of Idlib rose on Saturday amid a surge in airstrikes that has forced thousands to flee from the last remaining opposition stronghold in the country.

At least 12 people were killed in airstrikes the town of Saraqeb on Saturday, the Britain-based Syrian Observatory for Human Rights said, adding that clashes this week have killed nearly 140 people.

The area has been the target of intensified airstrikes carried out by the Syrian army and Russian forces.

The United Nations urged for an "immediate de-escalation," saying that the Syrian government offensive has already displaced 60,000 residents in Idlib.

About 3 million people live in the region, including many who were already displaced by violence in other parts of Syria.

'You have blood on your hands'

Concerns over the humanitarian situation in Idlib rose after Russia and China vetoed a UN Security Council resolution on Friday that would have extended cross-border aid by a year.

US Secretary of State Mike Pompeo sharply criticized the move on Saturday, calling the veto "shameful."

"To Russia and China, who have chosen to make a political statement by opposing this resolution, you have blood on your hands," he added.

The resolution, drafted by Germany, Belgium and Kuwait, would have allowed humanitarian deliveries to Syria from two locations in Turkey and one in Iraq.

Russia, which is allied with Syrian President Bashar Assad, only wanted to approve deliveries for six months and limit them to the two Turkish locations.

Aid could stop in January

Unless an alternative agreement is found, UN-funded assistance could stop being delivered to rebel-held areas of Syria starting in January.

Aid group Oxfam said that many displaced people in Idlib relied on the life-saving deliveries.

"There is no realistic way of reaching hundreds of thousands of these families" except though cross-border operations, the group said in a statement.

The conflict in Syria has displaced millions of people and killed over 370,000 since it began in 2011.