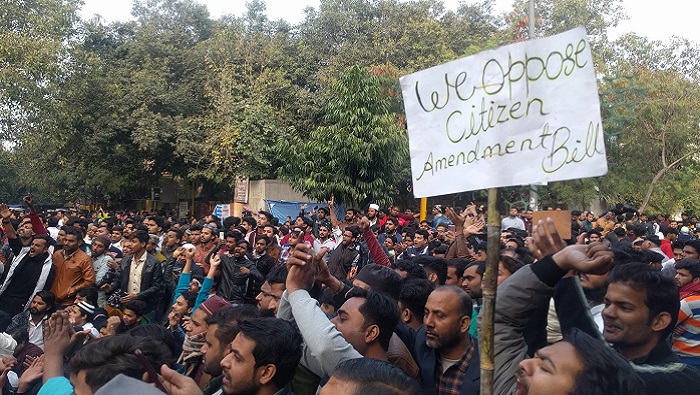 New Delhi: Three people were killed, two in the southern state of Karnataka and one in the northern state of Uttar Pradesh as massive countrywide protests against the controversial new citizenship law swept India, officials said Friday.

The protests were staged in at least 10 states on Thursday. Although authorities had imposed the prohibitory orders and denied permission for the protests, people defied police restrictions and took to roads across Uttar Pradesh, parts of New Delhi, Karnataka, Gujarat, Telangana and Madhya Pradesh.

"In Mangaluru during the massive clashes between protesters and policemen, police opened fire to contain the situation, which resulted in the killing of two people," an official in Bengaluru said.

Authorities have imposed curfew and ban on mobile internet in Mangaluru area of Karnataka to contain the protests.

Similar restrictions have been imposed in parts of Uttar Pradesh, where one person was killed and three others injured on Thursday.

The killing took place in Lucknow, the capital city of Uttar Pradesh. Violent protests rocked several parts of Uttar Pradesh including Lucknow. The protesters threw stones on police and resorted to arson by setting several vehicles and police posts on fire in Lucknow.

"The prohibitory orders are in place and the internet has been banned in several places as a precautionary measure," an official said.

Uttar Pradesh Chief Minister Yogi Adityanath warned his government will take revenge on those involved in damaging public assets by "auctioning" their properties to compensate for the loss.

"There was violence in Lucknow and Sambhal and we will deal with it strictly. All properties of those involved in damaging public assets will be seized and auctioned to compensate for the losses. They have been captured in video and CCTV footage. We will take 'badla' (revenge) on them," Adityanath said.

Meanwhile, the situation in the capital of New Delhi seems to have improved as authorities have restored the internet ban.

The Delhi-Haryana border which was sealed for eight hours on Thursday triggered massive, traffic snarls and resulted in delaying flights.

The 20 metro stations that were closed on Thursday in wake of massive protests in the city have been thrown open except the two in Jamia Millia Islamia and Jasola Vihar Shaheen Bagh. Last week Jamia Millia Islamia university area witnessed massive clashes over the citizenship law, following which police entered the campus and roughed up students there.

Reports said two rallies are being scheduled in the capital city on Friday. However, authorities have not given permission for such gatherings.

Protests erupted across India and inside universities against the new citizenship law last week after the Indian parliament passed the controversial legislation.

The law is aimed at granting citizenship to illegal immigrants belonging to six religions -- Hinduism, Sikhism, Buddhism, Jainism, Parsi and Christianity -- from Bangladesh, Afghanistan and Pakistan. However, it has kept out Muslim immigrants from applying for citizenship.

Opposition parties and civil society members in India criticize the law as contrary to secular principles enshrined in India's constitution as it excludes Muslims.

A huge crowd gathered on Thursday inside Mumbai's August Kranti Maidan against the law. The peaceful protest was held until late in the night.

In the eastern state of West Bengal, Chief Minister Mamata Banerjee has been hitting roads and taking out foot marches along with people against the law. She has dared the ruling BJP government to go for a UN-monitored referendum on the new citizenship law in India.

Banerjee, along with chief ministers of Kerala and Punjab, has refused to implement the law in her state.

The main opposition Congress party said the BJP should be ashamed of the police action.

So far the government has not issued any statement that would cool the tempers.