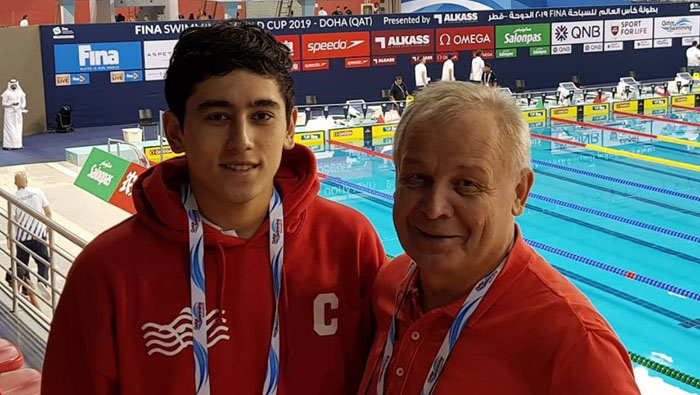 Muscat: As an eight-year-old, Marvarov Mirjavohir dreamt of one day competing at the FINA World Championships, a global swimming tournament that sees the best swimmers from across the globe compete against each other for some of the sport’s biggest honours.
Last month, he made his dream a reality when, at the age of 17, he took part at the FINA Swimming World Cup final, which was held in Doha from 7 to 9 November, which featured 210 swimmers from 44 countries.
Marvarov – who is known by friends and family as Java – and is captain of the Nautilus academy swim team here in Muscat – had been trained for this since January 2016, by certified Olympic and Paralympic coach Ivan Proskura. He took part in five events: the 50m breaststroke, 100m breaststroke, 200m breaststroke, 50m freestyle and 200m individual medley.
Despite being only 17 years of age, Java had to race in his qualifying seed race in the 200m breaststroke against current world record holder Anton Chupkov. In the 100m breaststroke, he swam in the same heat as 27 years old Yasuhiro Koseki of Japan, an Asian record holder, and Arno Kamminga of the Netherlands, who is European Champion in the 4x50m mixed relay.
“This was a life-long dream of mine from age eight, which was when I’d first attended the FINA World Championships as a spectator,” explained Java, speaking to Times of Oman.
“I was running around, getting autographs from my favourite swimmers but this wasn’t enough for me. I then set myself a goal to race these world record holders and Olympic champions at the highest level.
“I am lucky to have Ivan Proskura, the Olympic coach, who helped me to train hard all these years to reach this level,” he added. “Having qualified for the FINA World Cup in Doha, Qatar, I got to race with world-class swimmers. Racing with them is completely different to watching them on TV or even at an event. The FINA World Cup was an amazing experience which has opened many doors for me, and more things to work on and improve. My next goal is to continue to compete at a higher level and learn many more things from such experiences.”
Coach Proskura added that motivation for not just Java, but any other swimmer, would only take place when consistent results were achieved in training, a lesson he learned from his American coaches when he was growing up in the Ukraine.
“I remember, back in the Ukraine, our coaches used to ask world-renowned American coaches on how they motivated their swimmers,” he explained. “The reply was simple: motivation happens during the training sessions and is based on your training results. This really had a positive impact on me and shaped my opinion. Despite this, however, I noticed the motivation of Ukrainian swimmers going down. The answer to this was simple, and could be attributed to one reason: the American swimmers would race three or four times a month, while the Ukrainian swimmers did not race that frequently.
“The GCC region offers a good number of swim meets, but, the meet results are not even close to that of international level, and surprisingly, we see that swimmers are satisfied with this level of results,” Ivan Proskura went on to explain. “This means that motivation doesn’t just come from the meets but from highly competitive meets. Our team has been able to attend the training sessions of the Dutch national team.”
In addition to training under Ivan Proskura at the Nautilus academy in Muscat, Java also trained with swimmers from the Netherlands’ national swim team, while some of the Ukraine’s top swimmers were also invited to come and motivate the younger athletes.
“Java was lucky to train with them shoulder to shoulder,” explained his coach, referring to his training sessions with the Dutch. “We have also invited a few top Ukrainian swimmers including the person who was crowned champion of Ukraine in the 1,500m freestyle in order to motivate our swimmers. Organising competitions as part of or alongside the training sessions is another motivational factor in my opinion.”