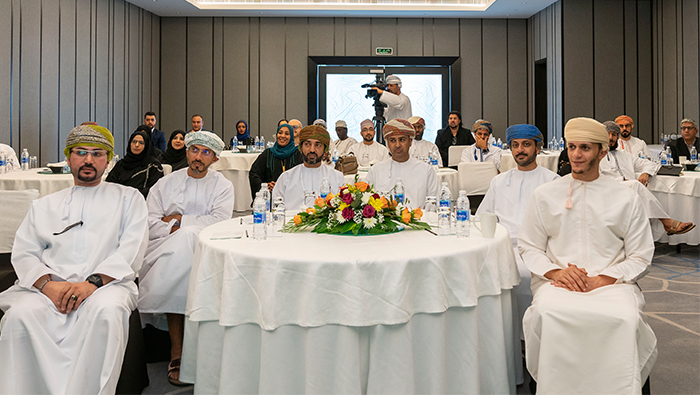 Muscat: The National Business Centre (NBC), an initiative of the Public Establishment for Industrial Estates – Madayn, concluded on Tuesday at Hormuz Grand Muscat it's mentorship programme that commenced in March this year.
The mentorship programme targeted 20 incubated small and medium enterprises at NBC and Riyada. The programme aspired to facilitate SMEs’ access to industry leaders, experts, business owners. The programme also aimed at contributing to empowering these SMEs and exploring channels to enhance the development of the entrepreneurial system.
Speaking at the event, Nasser Al Malki, Director General of the National Business Centre, stated, “NBC Mentorship Programme continued for six months and featured 20 mentors and experts representing several fields including the industrial sector, banking, technology, academy, and entrepreneurship. The mentors provided extensive sessions to the incubated companies at NBC and Riyada.”
Commenting on Madayn’s efforts in supporting entrepreneurs in Oman, Al Malki pointed out that the journey began with the establishment of The Knowledge Mine (TKM) back in 2004 to create an ideal environment to nurture start-ups and encourage Omani youth and entrepreneurs to develop their innovative businesses in the field of ICT.
“Following the success of TKM, Madayn took the decision to turn TKM into a specialised centre for incubating and developing SMEs in different fields, and therefore, the National Business Centre was launched in 2013,” he said, adding, “Madayn gives strong emphasis on the role played by SMEs in the advancement of the national economy. Today, NBC acts as a key incubator for the SMEs and provides technical, administrative, logistics, and awareness support for emerging projects and innovative business ideas.”
Unique experience
The mentors who were involved in the programme emphasised on the significance of such programmes in assisting SMEs to overcome the challenges they face and develop comprehensive plans. The entrepreneur Zuwaina Al Badaai who was involved as a mentor in the programme described her experience in NBC Mentorship Programme as a 'positive and enjoyable' one. She emphasised that the programme was able to achieve the goals set for it. “I believe that NBC is undertaking significant efforts that allow the SMEs to successfully implement their plans and programmes,” Al Badaai said.
On his part, William Crew, CEO of Inspired Solutions and a mentor in the programme, said, “The Mentorship Programme launched by NBC this year is practical, useful and significant for the young entrepreneurs. It feels great for us as mentors to share the experience we have gained throughout the years with the entrepreneurs voluntarily. Besides, the mentors must give tips to the owners of SMEs on how to eliminate the challenges they may face in their entrepreneurship journeys.”
Camilo Flick, another mentor, commented, “The Mentorship Programme is not only limited to sharing experiences and knowledge but also focuses on the element of patience. From my point of view, I believe that the programme provides the necessary methods to the participants who enable them to adapt to the work environment and gain patience to achieve the required results.”
Faiza Al Mazroui, owner of the African specialised cuisine – Savannah Restaurant, which is incubated at NBC, explained that the programme was useful for the SMEs. “My previous experience was only focused on the commercial side. However, after joining this programme, I got closer to the industrial side and became aware of how to evaluate the products and determine their prices before they are sent to the market for sale,” Al Mazroui said, adding: “During the programme, I was involved as a participant with Areej Vegetable Oils and Derivatives. Following the programme, I have agreed with Areej Vegetable Oils and Derivatives to produce my product which will be launched soon.”
On his part, Eng. Salim Al Bortmany, CEO of Areej Vegetable Oils and Derivatives, expressed his contentment of being part of the NBC Mentorship Programme. He noted that the company caters to the needs of restaurants, bakeries, food factories and catering companies. It should be noted that the company was established in 1982 with a total production capacity of around 9,000 tonnes per year and with only one production line. The company has developed over the years and the production capacity has recently touched more than 240,000 tonnes per year to meet the increasing demand for the company’s products from overseas markets.