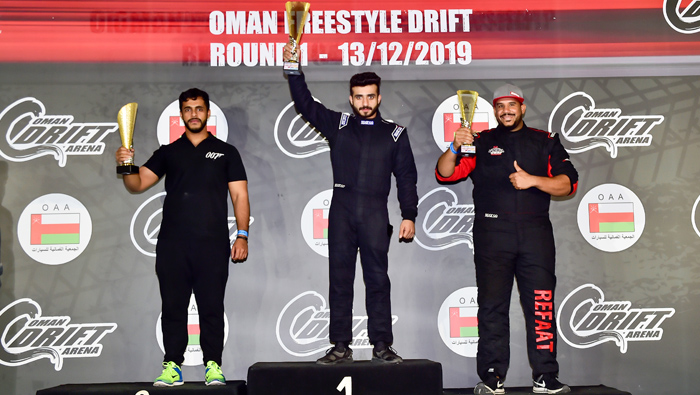 In the SUV category of the round, the contestant Muhammad Al-Jabri won the first place, while the second place was won by Mr. Al Sayyed Omar Al-Hashemi from the United Arab Emirates, and Walid Al-Jadidi won the third place.

For each round, a total of one hundred points is calculated, and the winners of the first positions in each of the two categories of the championship will be based on the total number of points the competitor collects in the three rounds.

The race manager in the championship Ali Al Baluchi said: “This is the first version of the championship. It was held in previous years, for almost seven years, with the round system, one round every year - specifically in the month of Ramadan every year - and it was not an official championship. Now we found that due to the high turnout and the high level of professionals wishing to participate, it is time to be a certified championship, which was done this time and will be an annual practice.”

Commenting on winning first place in the round in the sedans category, His Highness Zulkifl bin Fatik bin Fihr Al Said said: “I was afraid of the car breakdown, especially the machine malfunctions, because I am confident of myself and my performance. The type of these races depends not only on the rider but also on the car. Any vehicle malfunction causes the rider to lose. Indeed, a slight malfunction occurred with me during the race, but I continued and tried to forget it and I managed to overcome it.”

The second place winner, contestant Al-Sayyed Omar Al-Hashemi from the United Arab Emirates, said: “I thank all those who organize and supervise this championship for everything they did, from reception to generous hospitality. The race is very organized and is better than many other championships in which I participated over six years. I say that the next one will be even better and I hope to participate in the next races of the Association as I wish success to everyone.”

The third place winner in the rider's salon car category Refat Al-Yehiai, said: “I expected a higher position, but this is the state of sports, especially this type of sports. The race competitions were very hot as most of the participants are big and well-known names in this sport. The first round of the race is known to have a great deal of extra enthusiasm, which may lead some of us to make some mistakes.”