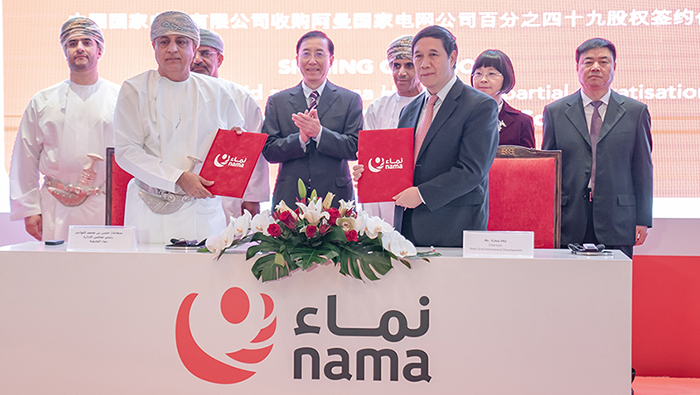 Muscat: State Grid International Development Limited (SGID) and Nama Holding signed the agreements pertaining to the sale of 49 per cent shares of Oman Electricity Transmission Company (OETC), during a ceremony held in Muscat, Oman on on December 15.
The OETC transaction is conditional only upon the approval of the Authority for Electricity Regulation, and (subject to satisfaction of this condition) completion is expected to occur in early 2020.
Saud Nasser Rashid Al Shukaili, chairman of the Privatisation Supervisory Committee, stated: “Nama Holding is committed to implementing the privatisation programme of Oman’s electricity sector according to the set timeframe. We are delighted to announce the completion of the privatisation of OETC today with State Grid International Development Limited, one of the largest operators of electricity transmission networks in the world with a total asset of $41.2 billion; with international operations covering Philippines, Portugal, Brazil, Australia, Hong Kong, Italy and Greece.”
Lazard Frères acted as financial adviser, London Economics as economic adviser,Herbert Smith Freehills as international counsel, Al Busaidy, Mansoor Jamal & Co (AMJ) as local counsel, Zeenah PR as communications consultant, ESBI as technical consultant and EY as accounting and tax consulant to Nama Holding.
HSBC acted as financial advisor, Allen & Overy as international legal counsel, Addleshaw Goddard (AG) as local legal counsel, Deloitte as accounting and tax consultant, NERA Economic Consulting as market adviser and Ramboll as technical consultant to SGID.
In 2017, based on Oman's directives, Nama Holding (Electricity Holding Company) initiated the partial privatisation programme for the four electricity distribution and supply companies and the electricity transmission company, operating in Oman.
These companies are wholly owned by Nama Holding on behalf of the Government of Oman. The transactions consist of divesting up to 70 per cent of the shares held in the distribution and supply companies and up to 49 per cent of the shares held in the transmission company.
Through this privatisation programme, Nama Holding will support the government’s objectives of attracting foreign direct investments into the country and promoting private sector participation as part of the wider nation-building process. The objective is also to harness best-in-class technologies and technical and administrative expertise in these companies, which will result in human resource development, improved customer satisfaction and a more efficient resource utilisation. This will, in turn, translate into a more optimised economic cost per unit of electricity supplied over time.
In October 2018, the first phase of this privatisation programme was launched at a press conference held in London, by announcing the sale of up to 49 per cent of the shares held in OETC and up to 70 per cent of the shares held in the distribution & supply companies. Eligible international entities were invited to participate in the process and submit Expressions of Interests (EOI).
For OETC, Nama Holding received 11 EOIs from 16 international investors, either individually or in consortia. At the conclusion of the process for OETC, State Grid International Development Ltd. (SGID), incorporated in Hong Kong, was declared the winning bidder. SGID is the wholly-owned subsidiary of the State Grid Corporation of China (SGCC).