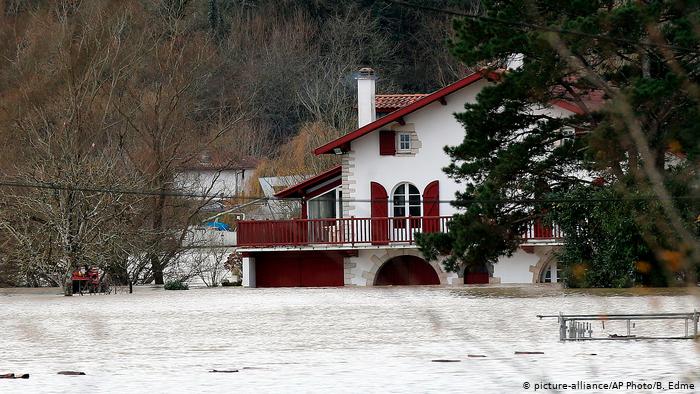 Inclement weather on Saturday felled trees and cut off power supply to thousands in southwestern France. The storm triggered floodwaters that reportedly rose by 30 centimeters (1 foot) every hour in some areas.

A 70-year-old man was killed when his vehicle struck a fallen tree. Another elderly man was swept away by rising waters in southwest region Lot-et-Garonne while he was fetching his mail. Rescuers found his body a day later more than 1 kilometer (0.6 miles) away from his home.

Five other people were injured when trees fell on their vehicles.

'Getting used to this'

Authorities preemptively evacuated some 600 people from the area of Landes, where the Gaves de Pau and Oloron rivers meet.

"We are getting used to this now," a local pensioner who gave his name as Christian told AFP news agency. "We put everything on the upper levels, and we clear out everything from the garage."

Utility company Enedis said that 25,000 homes were still without power on Saturday evening, adding that 2,000 technicians were deployed to deal with the problem.

Wind speed reached 142 kilometers (88 miles) per hour on the mainland on Friday. Even higher wind speeds of 175 kilometers per hour were measured on the island of Corsica.

By Sunday, however, weather service Meteo France downgraded the alert level in most of the affected areas from the highest of red to orange.

The latest storms come less than three weeks after several people lost their lives due to extreme weather in Italy and France.