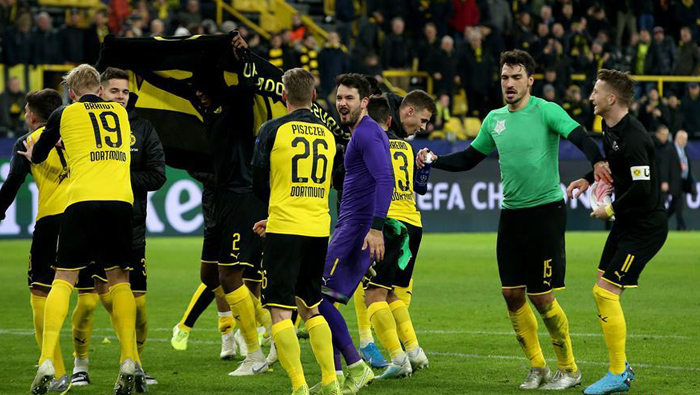 Berlin: A goal and an assist from Jadon Sancho helped Borussia Dortmund to a crucial 2-1 victory over Slavia Prague in UEFA Champions League Group F on Tuesday.

BVB had goalkeeper Roman Burki to thank for their win, after the Swiss made several saves to help the German side qualify for the tournament's knockout stage.

Dortmund gained the upper hand and pressed hard to double their advantage, but Reus failed to extend the lead after losing a one-on-one with goalkeeper Ondrej Kolar five minutes later.

Both keepers had busy nights as Burki had to tip Nicolae Stanciu's one-timer around the post on 20 minutes, and shortly afterwards Reus again went one-on-one with Kolar, with the Slavia goalie again winning that particular battle.

Slavia rallied and leveled the scores before the break when Tomas Soucek finished off a combination move via Milan Skoda in the 43rd minute.
To make things worse for Dortmund, Inter Milan also equalized in their match against Barcelona, meaning the German side would have to better the Italians' result in order to finish Group F ahead of them.

After the restart, Dortmund came out with all guns blazing, knowing that only a win would put them through. Julian Brandt had a golden chance to give the hosts the lead but the German international pulled his effort wide six minutes into the half.

Brandt would not be denied on the hour mark, as he slotted home from Sancho's pass to put Dortmund 2-1 ahead.

The latter stages of the game saw Slavia throw everything up front, while Dortmund's Julian Weigl received his marching orders for a second yellow card in the 77th minute, but the German side rode out the storm to win the game and secure their place in the Champions League knockout stages.

"We have all made this win possible," said a relieved Favre afterwards. "It was a see-saw match with chances on both sides but we wanted the win. However, Slavia is a strong team and they gave us a hard fight. Roman Burki staged an unbelievable performance today."

With the result, Borussia Dortmund finish Group F in second place with 10 points, behind group winners Barcelona (14 points) but ahead of Inter (7 points) and Slavia Prague (2 points).