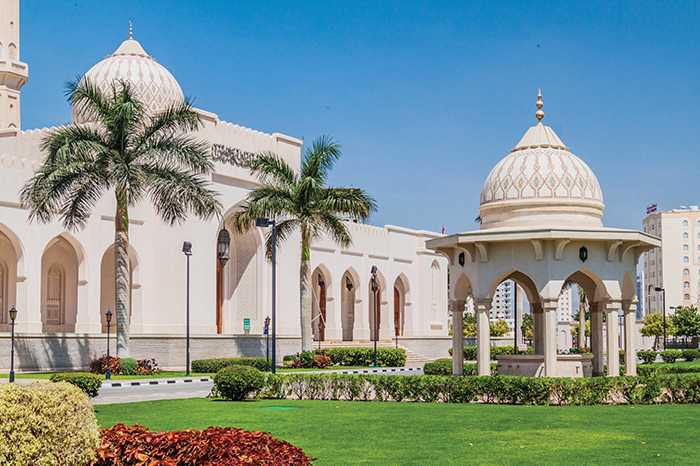 One of the several mosques named after His Majesty Sultan Qaboos bin Said, The Grand Mosque in Salalah has often been a place of quiet contemplation and sincere devotion, while also being one of the most recognisable and well-known buildings in the capital of the Dhofar.
The largest mosque in Salalah is definitely an inspired place of worship that’s worth a visit if you are in Salalah. The Sultan Qaboos Mosque is located in the heart of the city, where people who come to pray and also the visitors stand in awe as they admire its architectural beauty inspired by the Islamic and cultural motifs from Oman’s history. Inside the mosque, the prayer hall is beautifully decorated with crystal chandeliers, handwoven carpets in shades of green, and patterned walls.
The towering mosque welcomes thousands of worshippers for prayers each day. Make sure to visit the landmark during the visiting hours: 8am to 11am.
Non-Muslim visitors must dress modestly and women should cover their head. The governorate has numerous other mosques spread across the town, Aqeel Mosque being the oldest of them, having been built in 1779. Its all-white exterior and geometric architecture tells tales from the past. “Sultan Qaboos Mosque, the largest mosque in Salalah, is located in the city centre,” said a statement from Salalah Airport. “It has a huge masjid that has a very nice architectural composition. The prayer hall is wonderfully decorated with chandeliers, green carpets and wall patterns, and many air conditioners have been installed. It has many places to do your ablutions.”