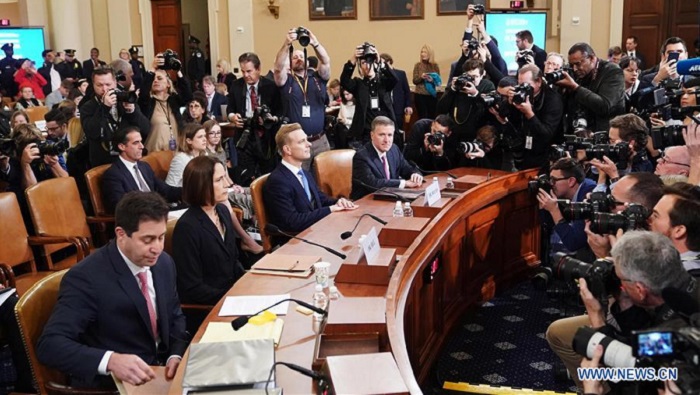 WASHINGTON: The last two witnesses scheduled for publicly testifying before a House panel as part of an impeachment inquiry into U.S. President Donald Trump offered their narratives of events relating to the investigation on Thursday.

Fiona Hill, former National Security Council senior director for Europe and Russia, told the House Intelligence Committee that she was told Trump's personal lawyer, Rudy Giuliani, was doing "explosive" things that would "probably come back to haunt us."

House impeachment investigators are trying to determine whether Trump withheld a military aid in order to pressure newly-elected Ukrainian President Volodymyr Zelensky into publicly announcing investigations into the Bidens and alleged Ukrainian interference in the 2016 election, which could politically benefit the White House.

David Holmes, a staffer from the U.S. Embassy in Ukraine, who also testified on Thursday, described a conversation he overheard between Trump and U.S. Ambassador to the European Union Gordon Sondland, which occurred on July 26, a day after a Trump-Zelensky phone call that triggered an anonymous whistleblower complaint and the impeachment inquiry.

"So, he's gonna do the investigation?" Trump asked, according to Holmes' account. "Ambassador Sondland replied that 'he's gonna do it.'"

Sondland testified at Capitol Hill on Wednesday. A total of eight witnesses publicly provided their testimonies this week.

White House press secretary Stephanie Grisham called the impeachment inquiry a "sick" and "rabid" desire to take down the president.

"The Democrats are clearly being motivated by a sick hatred for President Trump and their rabid desire to overturn the 2016 election," Grisham said in a statement. "Today's witnesses rely heavily on their own presumptions, assumptions and opinions."

Trump has denied any wrongdoing or a "quid pro quo," calling the impeachment inquiry a "hoax" and a "witch hunt."