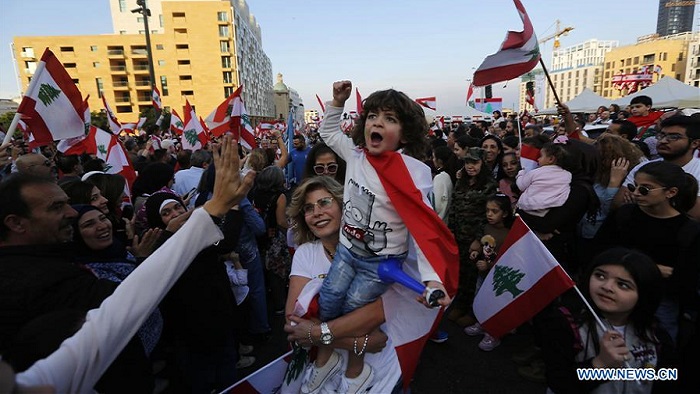 The parade, which took place in the capital Beirut's downtown, witnessed the participation of over one million people, including lawyers, doctors, retired military veterans, students, environmentalists, and other professionals and segments of the society.

The parade comes a month after the country witnessed nationwide protests against the ruling political class leading to the resignation of the government of caretaker Prime Minister Saad Hariri.

Protesters were keen to organize this year a parade of their own, while hoping to realize their dreams of changing the whole political system which is based on sectarianism by creating a secular state that acts in favor of Lebanon and its people.

Nationwide protests started on Oct. 17 following attempts by the past government to impose taxes on the Lebanese population without resorting to the implementation of real structural reform measures.

Protesters vowed not to leave the streets before witnessing real changes, including the fight against corruption by recuperating stolen public funds.

Lebanese top officials gathered earlier in the day to celebrate the yearly traditional Independence Day at the Defense Ministry in Yarze.

The official parade was supposed to take place in central Beirut, but it was called off due to protests in the area.