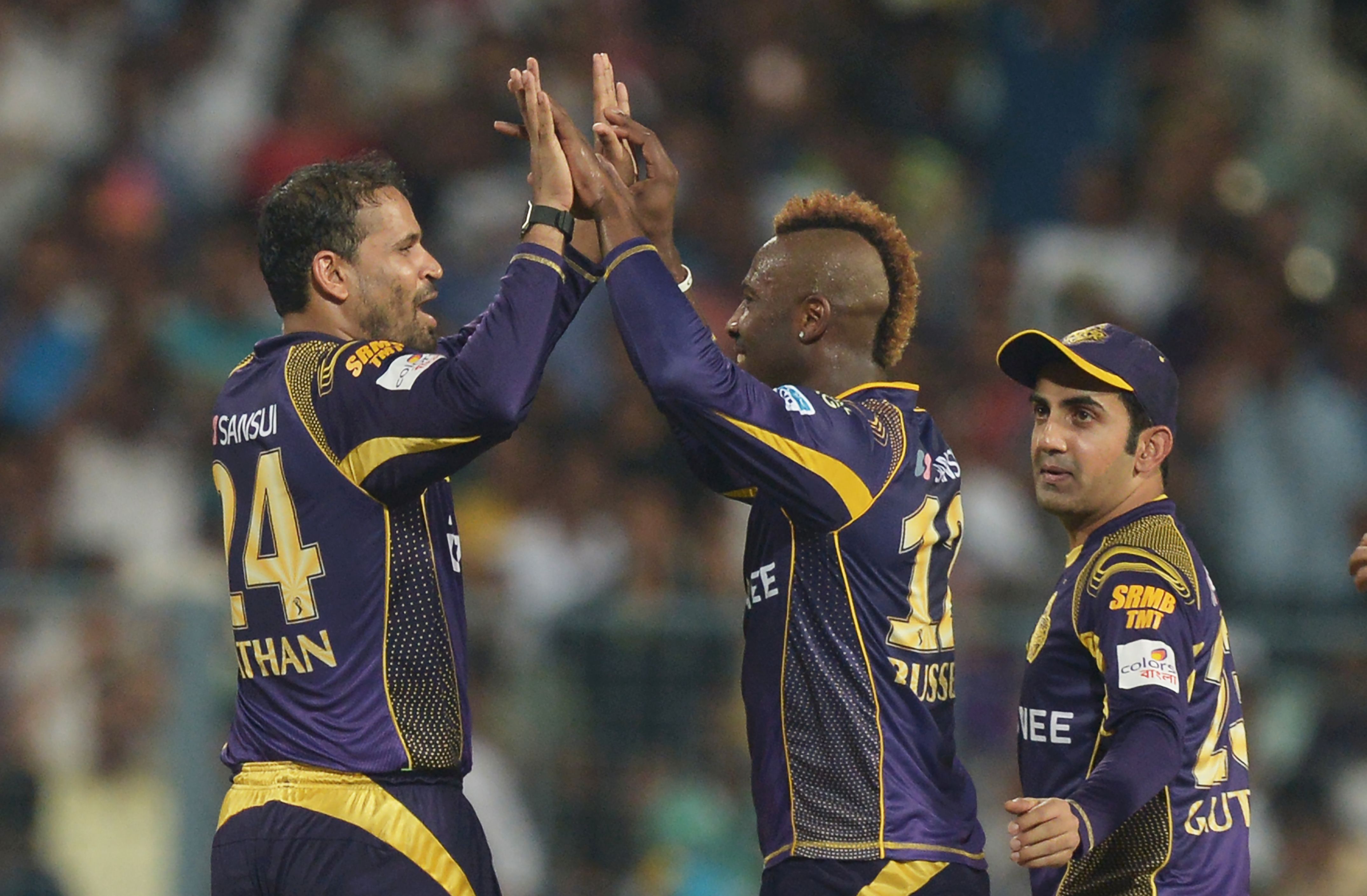 Kolkata: Andre Russell returned with a four-wicket haul to guide Kolkata Knight Riders to a seven-run win over Kings XI Punjab and to top of the points table in in the Indian Premier League (IPL) T20 tournament here on Wednesday.
Put into bat, Gautam Gambhir and Robin Uthappa blasted half centuries to give Kolkata Knight Riders a perfect launchpad but Kings XI Punjab did well to restrict them to a modest 164 for three.
The hosts then returned to restrict Punjab to 157 for nine in their stipulated 20 overs, despite a strokeful 68 off 42 balls by Australia’s Glenn Maxwell and a seven-ball 21-run cameo by Axar Patel down the order.
Put into bat, the two-time former champions Kolkata once again got off to solid start with Gambhir (54 from 45 balls; 6x4, 1x6) and Uthappa (70 from 49 balls; 6x4, 2x6) setting up a firm foundation in a 101-run partnership from 13.3 overs.
It was their highest opening wicket stand this season, and third overall century partnership, that put them in right stead but their star duo of Yusuf Pathan and Andre Russell failed to bring up their last match’s heroics to be content with a total which could have been much bigger.
In reply, KXIP were reduced to 13 for three in 19 balls with Russell’s twin blows in his first two overs and Morne Morkel dismissing skipper Murali Vijay (6) cheaply.
In Wriddhiman Saha (24 from 20 balls), the Punjab franchise got some hope but the local lad got out to a poor shot dragging a wide delivery to his stumps.
At 53 for four in 9 overs, the Kings were staring at their sixth loss this season but Maxwell held fort with his superb innings which was laced with six fours and four sixes to keep them in the hunt in a crucial 67-run partnership from 40 balls with David Miller (13).
But Piyush Chawla (two for 27) trapped the Aussie with a wrong one to swing the fortunes for KKR in the 16th over.
There was more drama in store when the Patel smacked Russell to two successive sixes as KXIP needed 12 runs from the last overs but Russell ran out the lefthander in the second ball to seal the issue.
Brief scores: Kolkata Knight Riders 164/3 in 20 overs (Robin Uthappa 70, Gautam Gambhir 54) bt Kings XI Punjab: 157/9 in 20 overs (Glenn Maxwell 68; Andre Russell 4/20).