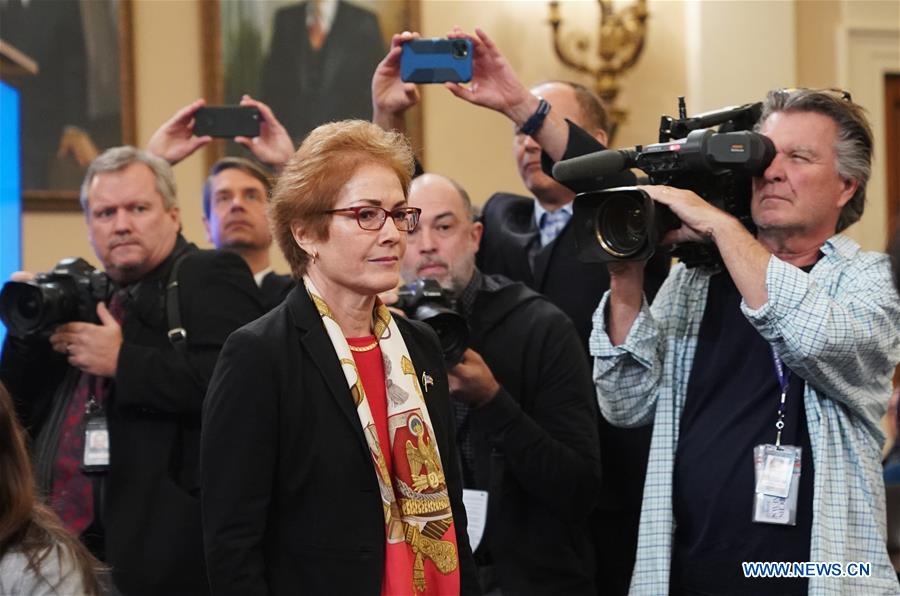 Yovanovitch said she was targeted with a "smear campaign" advanced by Trump's personal lawyer Rudy Giuliani and other allies of the president.

"Everywhere Marie Yovanovitch went turned bad...the new Ukrainian President spoke unfavorably about her in my second phone call with him," Trump tweeted during her testimony.

When asked about Trump's tweet, Yovanovitch said, "It's very intimidating."

"I think the effect is to be intimidating," she added. "I actually think that where I've served over the years, I and others demonstrably have made things better."

"We take this kind of witness intimidation and obstruction of inquiry very seriously," House Intelligence Committee Chairman Adam Schiff said in the recess.

"The tweet was not witness intimidation, it was simply the President's opinion, which he is entitled to. This is not a trial, it is a partisan political process -- or to put it more accurately, a totally illegitimate, charade stacked against the President," Grisham said in a statement.

Outside the hearing, some Republican lawmakers defended Trump's attacks against Yovanovitch, saying the president was not going to sit back without defending himself, local media reported.

However, Republican lawmaker Liz Cheney said Trump was wrong to tweet criticism of Yovanovitch during her testimony since the diplomat "clearly is somebody who's been a public servant to the United States for decades."

"I don't think the president should have done that," Cheney was quoted as saying.

The White House on Friday released a rough transcript of Trump's first conversation with Ukrainian President Volodymyr Zelensky after he was elected in April, months before a highly controversial July phone call between the two leaders that became the focus of the House Democrats' impeachment inquiry.

Yovanovitch has worked at the U.S. State Department for 33 years and was removed as ambassador to Ukraine on May 20. Schiff said on Friday that her recall opened the door to Trump's personal lawyer Giuliani to open an irregular channel of diplomacy with Ukraine, where Trump urged the probe of Democratic presidential hopeful Joe Biden and his son Hunter Biden.