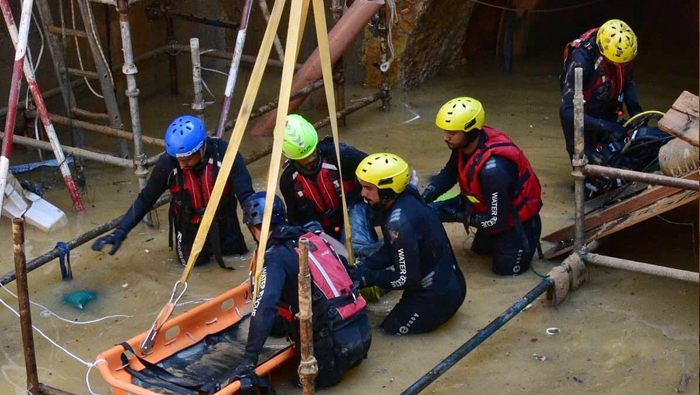 Muscat: Four of the six Indian workers who died at a construction site in Seeb on Sunday night were under the age of 30, and still had much of their lives ahead of them.
Of the six, the youngest was Budapana Raju Sathyanarayana, who was only 22 years old, and hailed from Eluru in Andhra Pradesh.
Working alongside him were 27-year-old Vikash Chauhan Mukhadev, from India’s northern state of Uttar Pradesh, and two 29-year-olds, Sunil Bharti and Vishwakarma Manji, both of whom were from Patna, the capital of Bihar.
The eldest of the six was Shanmugha Sundaram Senthil Kumar, from Tamil Nadu in his 40s. Working with them on a section of the pipe that was part of a water project in Seeb, with the aim of linking two parts of Muscat together, was 30-year-old Usurumurthi Bhimaraju, from Purushothapalli in Andhra Pradesh.
The six of them were working on a section of concrete pipe that was 300m long and 14 metres below ground level at a site in Seeb, despite there being heavy rains on Sunday evening, when a large volume of water entered the site and trapped them in the pipe, causing them to drown.
The Indian Embassy in Muscat is coordinating with all the agencies to send back their bodies as soon as possible.
Meanwhile, the Ministry of Manpower has informed that it will take “necessary legal action” against the company regarding the incident.
In a statement issued online, the Ministry said: “The Ministry of Manpower confirms that it is following up the incident of death of six workers of Asian nationalities after they were buried during their work in a water extension project in the Airport Heights in the wilayat of Seeb in Muscat governorate. And procedures are underway to take the necessary legal actions towards the company.”